Early Patristic literature and Christian tradition speak of St. Thomas the Apostle bringing the Christian faith to India.  According to these writers, he landed at the port of Mylapore and baptized several Jewish converts there.  Kerala, the most Christian part of India, claims him as the Apostle who first preached the good news to the ancient people there.

Not much is known historically about St. Thomas the Apostle, but he is revered by the Christian church all over India and by Hindus and Muslims as well. Tradition claims that St. Thomas the Apostle began his working life as a merchant and that he took care of the material needs of the people while preaching the gospel.  This combination of word and action gave credibility to his preaching.  People not only heard the good news, but they also saw powerful evidence of its life-transforming power.  In St. Thomas, they encountered a faith filled man committed to God and willing to serve selflessly and compassionately for the benefit of others. 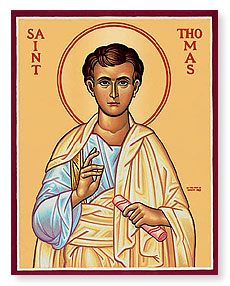 At Cross Catholic Outreach, our goal is to create the same impact in the developing countries where we serve.  Like St. Thomas, we know that the gospel becomes more real in peoples’ lives when they see the heartfelt compassion believers have for them.  Donors who contribute to Cross Catholic Outreach empower this work of love and mercy.  Their gifts for the poor help fulfill the church’s mission to preach the good news and make known God’s love for all people in Christ.

Please join this vital mission by supporting Cross Catholic Outreach with a gift to serve the poor.  Help make the gospel become vibrant and visible to those who need to experience the love of God in Christ in a tangible and concrete way.

September Light on a Knight – Jim Burk and Rich Eimer

Benefits of Having Clean Water