Today we celebrate the feast of St. John Vianney, also known as the Cure’ of Ars. His era was not unlike our own.  There was much confusion about life, greed, and a seeming lack of caring for truth and justice.

Ordained a diocesan priest, John Vianney looked forward with hope to better days for the world and the church.  He had a strong penchant for reform and saw that the formation of candidates for the priesthood was very weak.  He worked diligently on preparing a curriculum which was both rigorous academically and challenging spiritually.  He succeeded and his model is the model still used in Catholic seminary education today.

He showed by example how to minister to others, so that he preached not only by word but more strongly by example.  It was St. Francis of Assisi who said to his followers, “Preach always.  When necessary use words”.  John Vianney epitomizes that axiom of St. Francis. 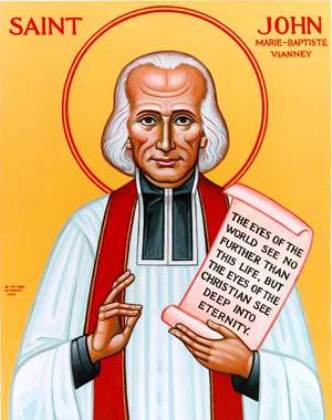 Look on our website and you find many education projects which Cross Catholic Outreach helps sponsor.  Young people educated in these programs are the future priests and religious of the church in the developing world.  They receive a strong Christian based education and learn the elements of their faith.  Inspired by the Holy Spirit many will answer the call to serve the Lord as a priest or religious, thus giving hope and comfort to many.  The work of St. John Vianney continues.  Will you join us in supporting the work of Catholic education in the developing world so that there will be ministers of the Gospel in the generations to come?