St. Vincent was born of poor parents in the village of Pouy in Gascony, France, about 1580. He enjoyed his first schooling under the Franciscan Fathers at Acqs.  In 1596, he went to the University of Toulouse for theological studies, and there he was ordained priest in 1600.

In 1605, on a voyage by sea from Marseilles to Narbonne, he fell into the hands of African pirates and was carried as a slave to Tunis. His captivity lasted about two years, until Divine Providence enabled him to effect his escape.  In 1617, he began to preach missions, and in 1625, he lay the foundations of a congregation which afterward became the Congregation of the Mission or Lazarists, so named on account of the Priory of St. Lazarus, which the Fathers began to occupy in 1633. 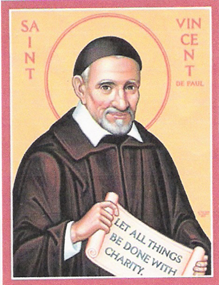 It would be impossible to enumerate all the works of this servant of God. Charity was his predominant virtue. It extended to all classes of persons, from forsaken childhood to old age. The Sisters of Charity congregation was also founded by St. Vincent. In the midst of the most distracting occupations his soul was always intimately united with God. His call to service to the poor is continued today through the charitable works of the St. Vincent de Paul Society, which has chapters in most dioceses. Cross Catholic Outreach partners with many missionaries to do the charitable work that St. Vincent gave his life to do. In the many countries where there is the greatest need and the most abject poverty, Cross Catholic Outreach brings hope and love to the suffering Christ in our world.

St. Vincent is a model of charity, much like St. Francis of Assisi before him. Cross shares in that same Catholic charism to love our neighbor as our self through our ministry. For more information about our work, visit our web site at: crosscatholic.org/.