The life of Francis of Assisi reminds us that people of holiness and greatness are not born that way. They become holy and great because they choose to act when God asks them to change the world, making his “kingdom come” on earth as it is in heaven.

Francis began life as a spoiled rich kid lacking nothing. We know very little about those early days of his life except that one day he heard the voice of God call to him to change his vision of the world and the people in it.

Francis became a different man because he made a conscious decision to look at the world through the eyes of God – and, as a result, became God’s instrument of love. For the first time in his life, Francis truly saw the face of Christ in the faces of sisters and brothers in need. He began his path to holiness by responding to those needs wherever and whenever he could. He gave his cloak to those who had none. He brought healing with words of understanding and compassion. He encouraged those suffering from bodily illness, nursing even those afflicted with dangerous leprosy. He shared the little food he had begged for with others who had even less. 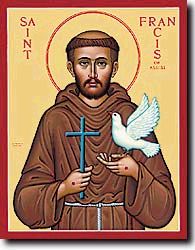 Francis of Assisi died at sunset on October 3, 1226. His death and burial were witnessed by hundreds of people from the order he founded as well as by the citizens from the towns he had touched with his compassion. They knew he was a special man –truly a saint in their midst! Within two years of his death, Francis was officially declared a saint by the Roman Catholic Church.