The feast day of St. Martin de Porres reminds all who work on behalf of the poor that man’s ways are not God’s ways. Rather than choose powerful and dynamic leaders to be his hands and feet on earth, our Lord often chooses saints from humble places and shapes them through difficult circumstances.

Martin de Porres lived during the 16th and 17th centuries when men of his position were expected to live out their lives as the simple house servants for wealthy families. Born the illegitimate son of a Spanish nobleman and a freed slave from Panama, Martin de Porres was abandoned by his father when he was about two years old. To make ends meet, his mother supported the family by taking in laundry and cleaning for the rich, and she had her son learn the trade of a barber-surgeon. 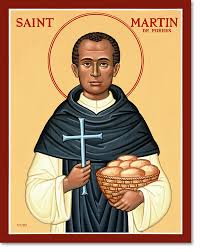 From early childhood, Martin knew the call of God and spent long hours in prayer. By law, he was forbidden from entering a religious order, so he asked to become a servant of the Dominicans in Lima where he could do menial tasks to keep the priory clean. His heart was full of God’s love for the poor, and he soon reached out to those in need around him. For example, he used his medical skills to treat those who could not afford care. He also began to feed the hungry, especially the children and the sick. In this way, Martin de Porres embodied the love of Jesus in the community he served.

Martin was eventually allowed to become a lay brother in the Dominican Order, something that he resisted because he said he was not worthy. In this role, he established an orphanage and a children’s hospital.

At Cross Catholic Outreach, we humbly seek to emulate Martin de Porres by being a similar instrument of love and transforming power. Through our many outreaches, we deliver food and safe water, medicines and school supplies. We work to build housing, orphanages, clinics and water sources. In this way, we carry on in the spirit of St. Martin de Porres.