A Blessed Transformation in Haiti

Sometimes God’s revelations occur at the most unexpected times. I experienced one of those transformative moments on a recent mission trip in the Central Plains of Haiti. It was one of those rainy days, so our group had scheduled as many indoor venues as possible. We had just finished visiting the Kobonal Mission Catholic School and were getting ready to leave when the clouds erupted and the rain came down in torrents. It was clear the storm wasn’t going anywhere, so we hung back at the school.

The extra time at the school gave me the opportunity to interview a 23-year-old math teacher, Camineta Guillame, and she made some amazing observations. She told me that the education kids get at the mission is making a huge difference to the lives of the entire society of the Central Plains. 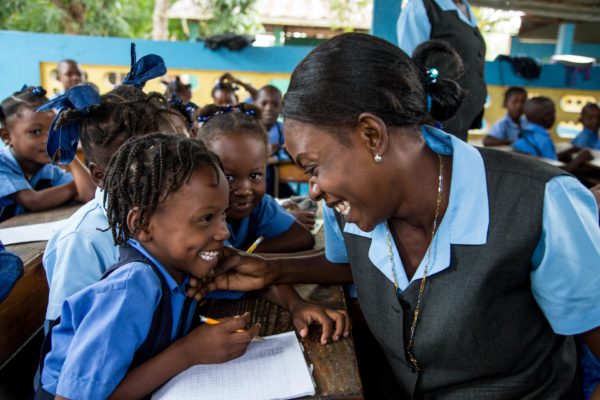 Just in the last decade, teacher Camineta Guillame has witnessed a transformation in the way Haitian students act.

Parents are supporting their children’s education like never before. “For example, it is raining today,” she said. “Ten years ago, the children would have stayed home and not gone to school. But today, we are full. Everyone realizes how important education is.”

“She is right,” I thought. Every single classroom at Kobonal School was overflowing with children, despite the weather. Clearly, these rural parents insist their children go to school, rain or shine, even though some have a one-or two-hour walk. And then I thought back to the field interviews I had with parents. Almost every parent wanted their children to have a better education than they had. Then Camineta said something else that further supported this focus on education.

“There is another thing,” Camineta said. “Most kids now know how to read and write. Their parents and grandparents may not know, but they do.” She smiled and said, “Things are changing. Young children want to come to school. We are breaking that cycle.”

I smiled too, because I knew her joy was reflected in the improvement of Haitian educational stats over the past decade. Latest figures show the literacy rate in Haiti at around 60%. Of course that’s unacceptable, but you have to remember that in 2010, the literacy rate was at 45%. That’s an astounding improvement in just six years!

As if God was telling me my lesson was over, the rain stopped. I thanked Camineta for her time, and paused for one more question. I asked if she had any challenges with the children’s behavior. She said, “Not really. Kids act better today than they used to.”

I smiled at another unexpected revelation.