When the devastating 7.0-magnitute earthquake struck Haiti in 2010, I was in the southern city of Les Cayes visiting a Cross project. There was a slight swaying of buildings and I remember wondering if it was worse elsewhere in the country. I’m a reluctant earthquake veteran – I’ve experienced several major quakes since I was a teenager living in Taiwan – so when cell phone service went out, my suspicions were confirmed.  There would be trouble ahead.

I spent the following week in meetings with international groups helping organize relief efforts but it wasn’t until I returned home and saw the images of destruction in and near the capital city of Port-au-Prince that it really hit home for me. The impact was mind-boggling: more than 100,000 dead, massive damage and unthinkable loss.

While the recent earthquake in Ecuador was not as intense or destructive, it was the most powerful in nearly seven decades and the most catastrophic in the region’s history.  The hardest-hit areas in Ecuador – the Manabi and Esmeraldas provinces – include some of the country’s poorest residents and a large Afro-Ecuadorean community, a group that was already marginalized and mired in poverty. Some 20,000 people are now homeless and continuing aftershocks have created an atmosphere of fear and insecurity.  Like we saw in Haiti, some families have been so traumatized they will only sleep outdoors. 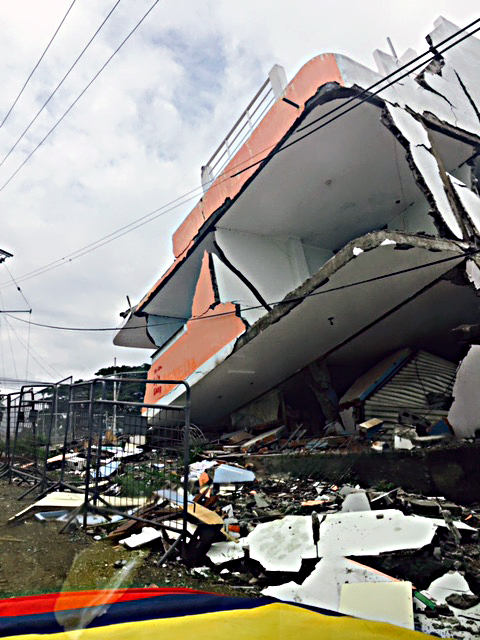 While Catholic leaders in the country will continue to deal with these issues, the media’s collective attention has shifted elsewhere.  That’s so often the way it goes, and it’s a tragedy because now is the time “the real work” begins.  Fortunately the Church is dependable in situations like these and does whatever it can, especially if we can provide some funding for the resources they need.

Cross Catholic Outreach has already committed to the people of Ecuador by providing pallets of emergency health kits for medical staff working in Manabi. The kits include essential medicines, supplies and medical devices to treat 10,000 people over 90 days. Our ministry partners, while they were not directly hit, also need your support and prayers as they work to help their fellow Ecuadoreans rebuild from nothing. Our Salesian partners are welcoming children who’ve been separated from their families into their boarding programs and the Working Boys Center is working to mobilize water, clothing and construct temporary housing for displaced families.

For churches, the hardest part after an earthquake is providing spiritual and psychological counseling and encouraging people not to give up. It’s hard, especially when family members are lost and the world media has moved on, taking the public’s attention with it. But I’ve also witnessed survivors lift up their voices to God and ask for help instead of cursing Him. I’ve heard miraculous stories of people who return to faith. And I always keep in mind what we’re told in Matthew 25:35 about our duty to our fellow man. It’s the Scripture I read most often because it captures so well what’s expected of us as believers: “For I was hungry and you gave me food, I was thirsty and you gave me something to drink, I was a stranger and you welcomed me, I was naked and you gave me clothing, I was sick and you took care of me, I was in prison and you visited me.”