Cardinal William Keeler: Patron of Charity in Word and Deed

Cardinal William Henry Keeler, Archbishop Emeritus of Baltimore, died on March 23rd 2017.  In that moment, Cross Catholic Outreach gained a new intercessor in heaven for its work here on earth, for at the beginning of the history of its foundation, it was Cardinal Keeler who envisioned the possibilities of what great work could be accomplished through a Catholic charity such as Cross Catholic Outreach.  He accepted the invitation to become the first official ecclesiastical patron of the organization.  From the beginning of his service in the hierarchy, Cardinal Keeler involved himself in two areas which he believed to be of the highest importance – interfaith religious relationships and promotion of the value of Catholic education.  When named Archbishop of Baltimore in 1989 some of the very first initiatives of his ministry were the promotion of educational and social outreaches in addition to the ongoing pastoral programs.  Under his leadership, housing opportunities for the homeless were expanded, tuition assistance increased for families, accessibility for the physically challenged increased, and assistance for teenage mothers and their children expanded. 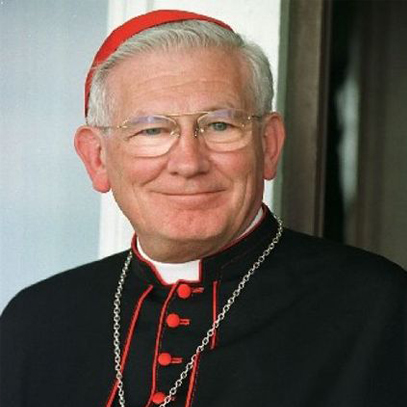 What Cardinal Keeler did on the local level was an example for Cross Catholic Outreach on a global level.  Our work, like his, is based on the concept of integral ministry – addressing the spiritual needs of the poor while attempting to improve the physical conditions of their lives through food, housing, education, training and other programs which seek to break the cycle of poverty into which the poorest of the poor are born.  Along with the entire American Church we mourn the loss of this great spiritual leader but rejoice in the knowledge of such a powerful patron in the eternal presence of God.