My Encounter With a Champion

As I stood at the back of this humble chapel, taking in this amazing moment, one particular child attracted my attention. He had one blind and clouded eye — but the other had a gleam in it. One of his ears was missing, but the other hung on to every word the priest said. His smile was bigger than everyone else’s, and he seemed to be oblivious to the third degree burn scars that covered his head, shoulders and chest.

After the children all received their Boxes of Joy, I got to meet this incredible child — 8-year-old Libio Miguel — as well as his mother Nidia and little brother. I learned that two years ago, while Nidia was away working, a gas lantern spilled on her precious son’s head. The family’s story of faith and survival was inspiring. How any young child could withstand such injuries was hard to fathom, but it was even more difficult to comprehend in light of the burden of poverty the little family was also enduring. I was deeply touched as they told me how God had moved people of faith to respond to Libio’s needs, including funding his major surgery. 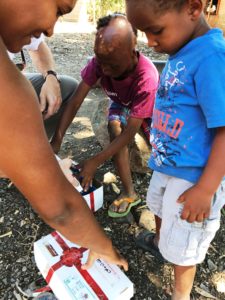 It was obvious that Libio has many challenges ahead. But for that day, he got to be just a regular little boy! As he opened his Box of Joy, the first he removed was “The Story of Jesus,” and right under that was a football. He exploded with excitement and snatched it up. I helped him remove the packaging, and for the next ten minutes, God blessed me with the privilege of throwing passes with one of the greatest survivors and champions I have ever met. For that day, Libio became an all-star quarterback, while I gained a deeper understanding of the power of love.

It’s been such a privilege to be a part of this compassionate outreach that you have made possible. Thank you for putting smiles on the faces of children like Libio! 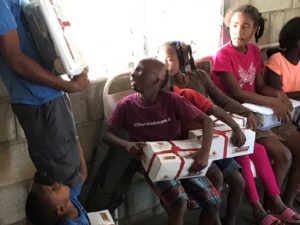 Libio & his Box Of Joy