Forston and his daughter Tisaine suffer constant illness from the dirty water they drink.

One of the most urgent problems facing the poor in eastern Zambia right now is a lack of clean, abundant water. The sinking water table has caused an increasingly desperate situation for families who depend on streams and shallow wells for their daily needs.

Recently, our efforts to respond to this need brought us to the remote, dusty village of Malaya. Here, hundreds of people survive by drawing water from a shallow, brown puddle at the bottom of a ditch. When the ditch runs dry, men take oxcarts outside the village to a functioning well and return hours later. When that well runs dry, there is no other option.

Though the temperature was cool on the day of our visit, the village headman’s face glistened with sweat — a sign of infection. 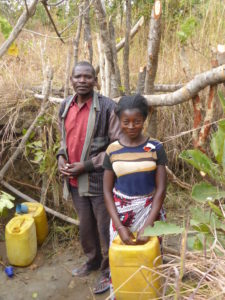 Forston Phiri didn’t spare the grim details as he told us about his life. Each and every day, he feels a “cutting” sensation in his gut. Often, the pain precedes diarrhea, as his body battles the parasites from his drinking water.

Not long before our arrival, his wife became ill and started to vomit yellow — a telltale sign of malaria contracted from mosquitoes that lay their larvae in still water. Malaria is commonplace here; but this time, his wife’s health took a turn for the worse. Then in February this year, she passed away.

Now Forston is a single parent struggling to provide for his six young children, while still drinking the same parasite-infested water that likely had a role in his wife’s death. His children, too, are plagued with chronic intestinal problems and vomiting, and they miss a lot of school days because of it. But Forston is helpless to break the cycle. They need water to survive, and the only available water makes them sick.

Please pray for this upcoming project, that God will grant success so that Forston’s family, as well as many other families suffering from the same hardships, will be delivered from thirst, sickness and misery.