Joy to the World

When I was preparing to take my first trip as a Cross Catholic staff writer, I expected to encounter poverty in developing nations. I did not immediately consider the joy that I would find thriving, even in the most challenging regions of the earth. I have found it, though – especially among children. The resilient joy of our littlest brothers and sisters will never cease to amaze me. 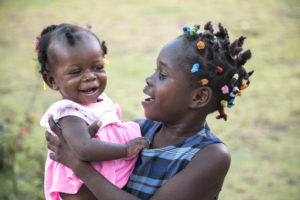 I encountered this joy on a recent trip to Haiti. Initially, I was nervous about visiting St. Therese Home, a Cross Catholic-supported project that provides safe shelter and care for children who have been separated from their families. I had read about the mission beforehand, so I knew that these boys and girls had already seen the darkest side of life. Some had been trafficked; others had been sold into cheap labor or used as indentured servants. Seemingly trustworthy adults had promised to reunite them with their families, but had taken advantage of them instead. As a result, I expected to find these children serious and sad – forced into a wounded maturity by the trauma of their experiences.

But that is not what I found.

The children at St. Therese Home were having fun! They played in the sunny courtyard and ran to us as we arrived. I was a stranger, but they gripped my hands on either side. Though they had not always received love, they still had so much love to give. Though they had every reason to withhold trust, they literally welcomed our entire team with open arms. I am sure that they still suffer, but the suffering has not stolen their ability to smile.

A lot of credit goes to the nuns and volunteers. Their sincere love for the children was evident, both to me and to the young recipients. Still, there was something more – something holy. These children presented a bright and shining example of Christ’s unconditional love.  Our Lord knew that we would wound him, and yet he ran to us.

As Christmas approaches, I cannot help but think of the children at St. Therese Home. I wonder which ones are still there, and which ones will spend their holiday at home, reunited with their families. But even more, I think of Christ in them. I think of his love, piercing through poverty and welling up in the hearts of children across the globe. I pray that I will follow their example – embracing others and exuding great joy, regardless of circumstance.

“He rules the world with truth and grace,

And makes the nations prove

The glories of his righteousness

And wonders of his love.”