“I don’t go find patients; God brings them to me.”

Sometimes the path God has for us is one we walk. Sometimes it’s a journey we make on a crowded public bus. Sister Agnes Phu is one of those travelers.

Sr. Agnes was riding a bus when she noticed the baby boy’s cleft palate and struck up a conversation with his mom. She learned that the cleft palate was just the most obvious of a myriad of problems that included a missing finger, a bad heart and a colon that would close if he didn’t get surgery. To make matters worse, Sohao’s father was away most of the time for work, leaving his wife to deal with this crisis on her own while also mourning her mother’s recent death. 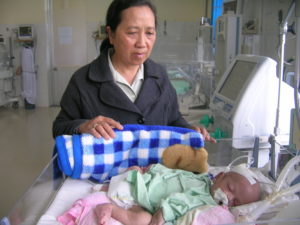 The situation seemed hopeless. But thanks to the “chance” meeting on a bus, Sr. Agnes was able to connect Sohao with a medical team that began providing the baby with the professional care he needed. One by one, she hoped to give him all the necessary surgeries — a goal made possible by the generosity of Cross Catholic benefactors answering God’s call.

In this officially atheist country, Sr. Agnes’ faith seems to be rubbing off on others. The brief meeting with an adult patient named Vu Quoc Hung is proof of that. The middle-aged ironworker who nearly died from a heart condition told us his encounter with Sr. Agnes was divinely orchestrated. The day Vu fainted on the job, he just happened to be working near the hospital where Sr. Agnes was helping patients. Had he fainted elsewhere, he would never have met her, and thus wouldn’t have been able to afford the surgery that saved his life.

Vu said, “I thank God for the sisters and benefactors. I came at the right time. I’ve told many people that it’s a grace from God!”