God’s Presence in the Prison

Father Yves Cherelia visits prisoners at Grande Riviera du Nord city prison to pray with them and distribute soap as part of the Cap Haitien Prison Ministry program. This was a Cross Catholic Outreach trip to Haiti Nov 6-10, 2017.  I was apprehensive about tagging along with the Cap-Haitien Prison Ministry in Haiti. I had heard stories about prisons in developing countries, but I had never seen one for myself.  Would it be shocking?  Would the suffering be overwhelming?  Was I prepared for what I would see? It turned out to be one of the most eye-opening experiences of my life.  To be honest, it was shocking too.  The conditions were harsher than I could have imagined. 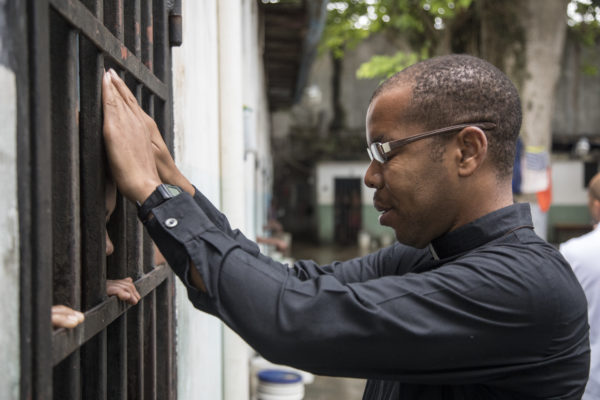 Small cells were beyond overcrowded, packed with 30 to 35 prisoners, and the inmates didn’t have access to adequate hydration, hygiene or medical care. The stories they told were sobering; however, the visit only reinforced my belief in God’s omnipotent presence and powerful love. It proved to me that evidence of his grace exists even in the hardest and darkest places on earth.I received a reminder of this from Father Yves Cherelia, who visits the prisoners almost every day. With the heart of Christ, he faithfully encourages the suffering men, women and young people to turn toward the Lord. The genuine gratitude of the prisoners often encourages him in return.

For example, Father Yves once brought a box of clothing for the female prisoners to sort through and take. It would be an opportunity for them to replace the filthy, tattered garments they had worn for so long. A guard tried to dissuade the priest from presenting the gift, warning him that it would not be a good idea. The guard insisted the women would fight over the articles – that some would be greedy, while others would get nothing.

Fr. Yves simply smiled and said, “I do not think so.”

He entered the prison and set the new, clean clothes down in front of the women – and they surprised the guard. Rather than fight over the gift, they all sincerely thanked the priest and began to sort through the clothing, happily recommending sizes and colors to their fellow inmates.

“This will not fit me, but it would look great on you!” one said to another.

There was no greed. No arguments. No sign of the chaos the guard had foreseen. The women were thankful for the blessing of new, clean clothes and chose to bless one another in turn.

Even those of us who fall prey to hardships or sin should not be defined by the times we fail or fall. Either by force or by choice, we all walk through difficult seasons of life. But “where the Spirit of the Lord is, there is freedom” (2 Cor. 3:17). Even in an oppressive, primitive jail cell.

The truth of the Gospel touches lives, and the Church must continue to play a role in bringing the world a source of genuine joy.  That is the Church that Cross Catholic Outreach strives to empower.