I walked at “ground zero” of Volcán de Fuego’s eruption just 17 days after the disaster.

The town I stood in used to be San Miguel Los Lotes, but it was hard to believe people had lived there less than three weeks prior. I felt like I was walking among the weathered remnants of a long lost place – deserted decades earlier and absorbed back into the earth. How could this village have been bustling with activity less than a month ago?

As we went deeper into the destroyed village, we came upon two-story houses half-buried in ash, and one-story houses almost completely covered by what had been boiling-hot ash. Smoke still emanated from scorched tin roofing.

As I looked closely, the marks of humanity began to emerge. There were clothes on the line, a backpack on the ground, a table set for lunch – all terrible testaments of the swift and unexpected nature of the tragedy. Clearly, the families living here had been caught completely off guard.

José Antonio Rivera, a survivor from San Miguel Los Lotes, was walking with us through the remains of his town. “It was a day like this,” he told us. “The sun was out. Children were playing. People were working … One moment we were living our lives, and within minutes, everything came apart.”

Estimates vary on how many lives were lost that day. So far, sources have reported the recovery of about 350 bodies, but there are likely hundreds more – buried beneath the tons of scalding ash that fell on them. Some of the survivors we spoke with had lost between 20 and 30 family members. More than once, they used the word “cemetery” to describe the place they formerly called “home.”

Life for these families will never be the same, and today – nearly three months after the disaster occurred – survivors are still living in overcrowded emergency shelters. These packed shelters are not air-conditioned, and they grow incredibly hot with everyone inside. The bathrooms – designed to be used by a few people a day – are beginning to break down from overuse. Epidemics of illness and lice add to this misery.

As these grieving, traumatized people grow increasingly uncomfortable and frustrated, tensions rise. Such an environment breeds much conflict, and it is neither healthy nor safe for these families to remain where they are.

Thankfully, one of Cross Catholic Outreach’s valued local ministry partners, Friends for Health and Life, has been working tirelessly to deliver relief. In the beginning, our team provided them with emergency food, medicines and medical equipment. Now, we are sending them materials to build homes and help survivors move forward.

“[The survivors] lost everything, and I’m talking about everything – their smile, their hope,” Jorge Gramajo told me. As the founder of Friends for Health and Life, he feels a deep, personal motivation to do more. “Hope is the last thing a human being should lose,” he added. “I try to keep them from losing their hope.”

Please – continue to pray for Guatemala’s volcano survivors. We cannot return their loved ones or the world they once knew, but we can help to restore their dignity. 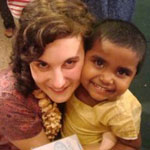 Gina is excited to enter the scene as Cross Catholic Outreach’s newest staff writer. With a bachelor’s degree in journalism from the University of Georgia, as well as a history in ministry, news writing, public relations and nonprofit communications, she feels that God has used every experience to prepare her for life with Cross. Gina is humbled to use all she has learned for the sake of the poor, to the glory of God. She hopes to continue learning and wordsmith the world into life-saving action.