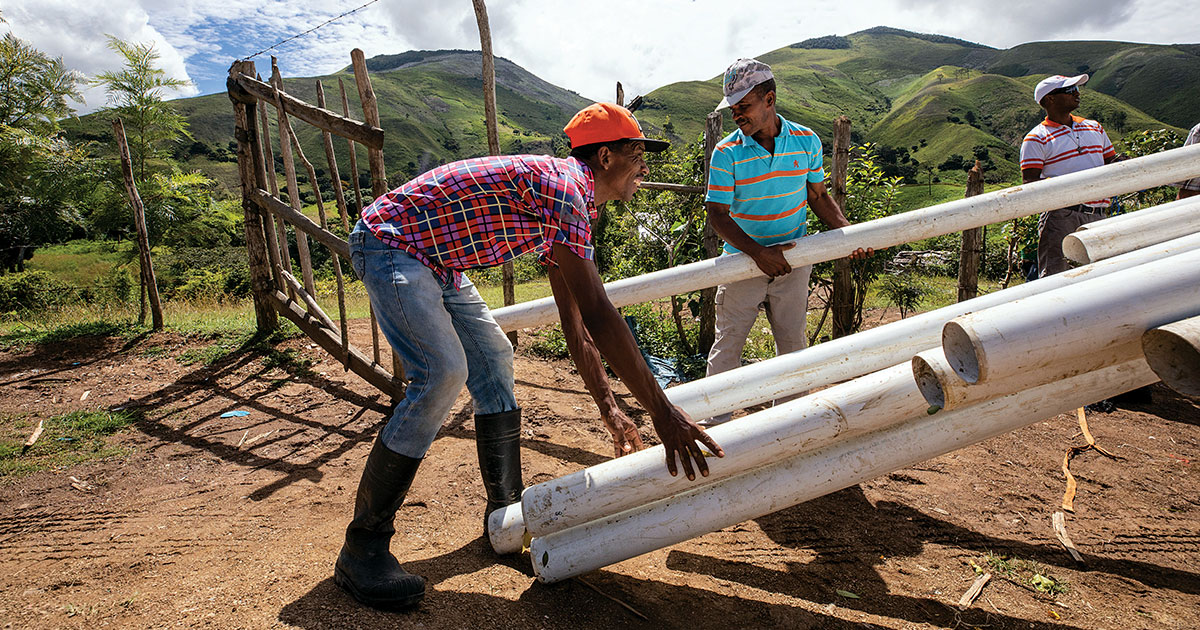 Working Alongside the Poor

Father Christian doesn’t look, talk or act like a priest — by which I mean he doesn’t fit the mold popular culture perpetuates.

When we joined the Dominican parish priest en route to a remote farming community in need of a water system, Fr. Christian arrived in jeans and a white t-shirt. If a colleague hadn’t let me in on the secret, I would’ve assumed he was a local farmer or maybe a water engineer.

On the bumpy mountain road to our destination, Fr. Christian waved hello to every person we passed, and he pointed out every coffee bean farm with the exuberance of a child spotting cows. He grew up in this world, close to the earth, with dirt under his fingernails and manure on the soles of his shoes. He doesn’t pity the poor — he’s proud of the poor and the work they do each day — and he carries himself as if saying prayers were no less natural than rising at daybreak to feed the chickens.

Along the way, we stopped to pick up a delivery that had been stranded the day before when Fr. Christian’s truck couldn’t clear a muddy incline. The stack of PVC pipes was significantly longer than the bed of our pickup truck, but Fr. Christian went to work. We secured the load, cleared the hill, got stuck in another muddy patch, and ultimately reach our destination, where families suffering from insufficient water access waited to greet us.

This is what it looks like to work alongside the poor. 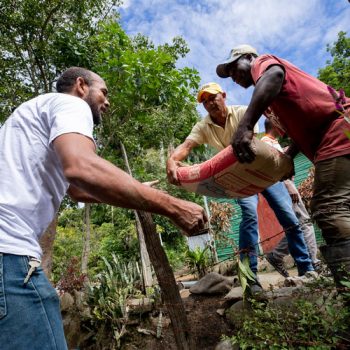 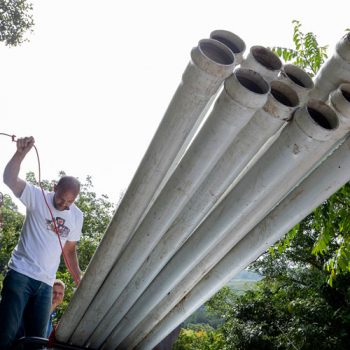 Good News: Clean Water for the Village of Catanamatias!

Cross Catholic Outreach just received this photo from our ministry partner FUNDASEP in the Dominican Republic. Thanks to gifts from our generous supporters, Bishop Jose Grullón Estrella recently dedicated this water system in the village of Catanamatias. Before the system was installed, poor villagers walked miles in mountainous terrain to collect contaminated water. Because of our compassionate donors, clean water is now pumped to a spigot in front of their homes. Praise the Lord!

One Priest. One Faith. 31 Congregations.

Once a month, Father Juan Reyes celebrates Mass at this makeshift chapel in Batey #2.  The Batey is one of many communities formed by poor Haitian immigrants who have migrated to the Dominican Republic in search of gainful employment in the sugar cane fields. Fr. Juan travels to an astonishing 30 remote locations like this – in addition to serving his home parish. What keeps him going? Philippians 4:13, “I can do all things through him who strengthens me.”

Cross Catholic Outreach ships supplies of medicine and food to Fr. Juan to serve the poor in the region. We love to work with such dedicated men of God in our efforts to improve the lives of the needy!

An Astonishing Thing to Behold

It was one of those images you never forget – a lone priest riding a donkey, traveling from house to house to carry out the Lord’s work.

I was in the Dominican Republic, helping our Goods-In-Kind partner, Fundación Ciento Por Uno, deliver food to the poor in the remote Azua province – a long 3-hour drive from Santo Domingo way up in the mountains along winding dirt roads. That’s when I met this simple parish priest, Father Juan Cardenas, who felt the presence of God from the moment he started serving the poor.

“I never imagined myself working in the mountains; riding a donkey,” said Fr. Juan. “I was a scholar, studying in Rome, Portugal and Brazil. But God decided he needed me to serve the poor here in the remotest of places in the DR. That is what I do now and I know God is with me.”

He leaned forward, put his hand on my arm and his face erupted into a huge smile. He said, “You know how I know? Because God was with me even when I was robbed by bandits. They kidnapped me and tied me up. And even though I was frightened and weak, I somehow convinced the bandits to let me go. That wasn’t me,” he said. “That was God!”

Fr. Juan is such a humble man. I didn’t find it at all surprising that his favorite scripture was the Gospel of John. “It touches my heart,” he said. “He seems to be writing about his personal relationship with Jesus.” And as he spoke, I couldn’t help recalling the personal accounts that Fr. Juan was speaking of – how Mary anoints Jesus with her perfume, how Jesus washes the disciples’ feet, among others.

In the months to come, when the poor parishioners of the Azua province see this humble priest approach on the back of his donkey, they will notice he is training a young seminarian, Hector, to take over the parish. My heart is filled with hope that the same spirit of simple generosity will be passed on to a new generation.

Before Cross Catholic Outreach and our ministry partner FUNDASEP began construction on a new water tank, the people of Rinconcito used to use leaves to guide a small trickle of water into jugs.

Meeting basic water needs was a near impossibility for families in Rinconcito, a poor community in a remote, rural region of the Dominican Republic. Villagers only had three options—and all of them were unpleasant. They could draw from a hand-pump well that delivered salty water; they could spend half a day walking to a distant, freshwater river; or they could stand in line at the bottom of a hill, where villages use leaves to guide a small trickle of water into jugs. But, this river water tastes and smells like animal waste, and people using it run the risk of developing waterborne illnesses like cholera and chronic diarrhea.

In such dire circumstances, the needy people from this poor community cried out to the Lord in their thirst. And thankfully, their prayers are being answered though Cross Catholic Outreach and our ministry partner FUNDASEP, the rural outreach arm of the Diocese of San Juan de la Maguana. Together, we have almost finished building an aqueduct and clean water holding tank that will provide hundreds of people with the gift of water.

I remembered the people living in Rinconcito during this morning’s daily reading from Psalms 72:1, 12-13 and 18-19, which says:

For he rescues the needy who call to him, and the poor who has no one to help.

He has pity on the weak and the needy, and saves the needy from death.

Blessed be Yahweh, the God of Israel, who alone works wonders;

Blessed for ever his glorious name. May the whole world be filled with his glory!

This responsorial psalm is an encouraging reminder that our God rescues the needy and cares about the welfare of the destitute. Even though he alone saves, he invites us to help extend his blessings to his people. Families in Rinconcito have received the blessing of water that saves and are living proof of the wonderful works accomplished by Christ our Lord. 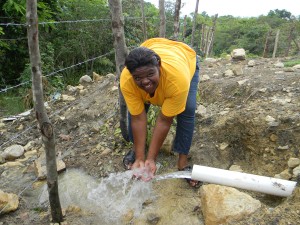 Nothing is Impossible with God

Thanks to Cross Catholic Outreach and our supporters, nearly 250 poor residents in the Dominican Republic are now receiving safe, clean water.

Cross Catholic Outreach International Projects Officer Claudio Merisio recently returned from a trip to the Dominican Republic, where he shared in a joyful celebration with the residents of La Patilla.

Why were these people celebrating?

Thanks to Cross Catholic, through our ministry partner FUNDASEP, they recently received a new 15,000-gallon water tank that is bringing safe, accessible water to 250 poor residents, who were previously using polluted water from a distant river.

“This water has united people,” said beneficiary Epifanio Mateo. “The community was deteriorating and many people were migrating to other areas. But now that the community has water, people are starting to come back and new people are moving in.”

The new water source is not only saving lives; it’s changing lives.

“I used to go to the river to fetch water. This was a difficult chore for me. One time I slipped and fell and was in pain for a long time,” said 70-year-old Rosa Moreta. “But now I have water at my doorstep. It is easy and painless to get. I am very grateful.

Claudio reported that the entire community shared in this thanks for the new water source. During his visit, they celebrated with hymns, Bible readings and a drama depicting the lives of residents before and after the water project.

“We are grateful for the Catholic Church for laying the first stone of this tank,” said one community member.

The community views the new water tank as a tangible expression of God’s faithfulness—and this has greatly encouraged religious leader Msgr. Jose Grullon Estrella: “The best evangelization is the one that manages to change people’s culture by bringing them closer to God.”

And that’s exactly why Cross Catholic partners with FUNDASEP. According to Claudio, FUNDASEP is doing a wonderful job displaying the Gospel. This was evident on many occasions during his trip—but one moment stood out among the rest.

He said by funding this water tank, it was apparent that Cross Catholic was not only meeting a physical need, but a spiritual one as well when beneficiary Francisco Medina performed a song he wrote in gratitude for our support: “Nada es imposible para ti; con Dios todo podemos!”  Nothing is impossible for you; with God we can do anything!”

An "Old Lady" Gets Her Miracle

I recently returned from the boondocks of the Dominican Republic, where we’re sponsoring construction of a remote bridge. We had to make sure my visit didn’t have rain in the forecast because once the river swelled I could have gotten stranded on the other side. The villagers have been stranded for weeks and months at a time. Farmers couldn’t take their harvest to the market, sick people couldn’t get to the hospital, teachers couldn’t come to the school, and villagers in town weren’t able make it back to their homes. Kids went without education, income-generating harvests rotted, supplies ran out, and things got pretty desperate. Some families even lost loved ones who tried to cross the river to get help, but died trying.

Victoria Victoriana came close to joining the mourners when her son almost drowned trying to cross the river. Villagers were able to rescue him, but Victoria never forgot that day’s trauma. She said, “Ever since my son was rescued, every day I asked God for the miracle of the bridge!”

Well, God answered her prayers. Today Puente de Milagros, the “Bridge of Miracles,” is being constructed and Victoria laid the first cornerstone.  She even contributed $5 of the $8 she owned toward the project. She told me, “I’m an old lady – I want to cross that bridge before I die!”