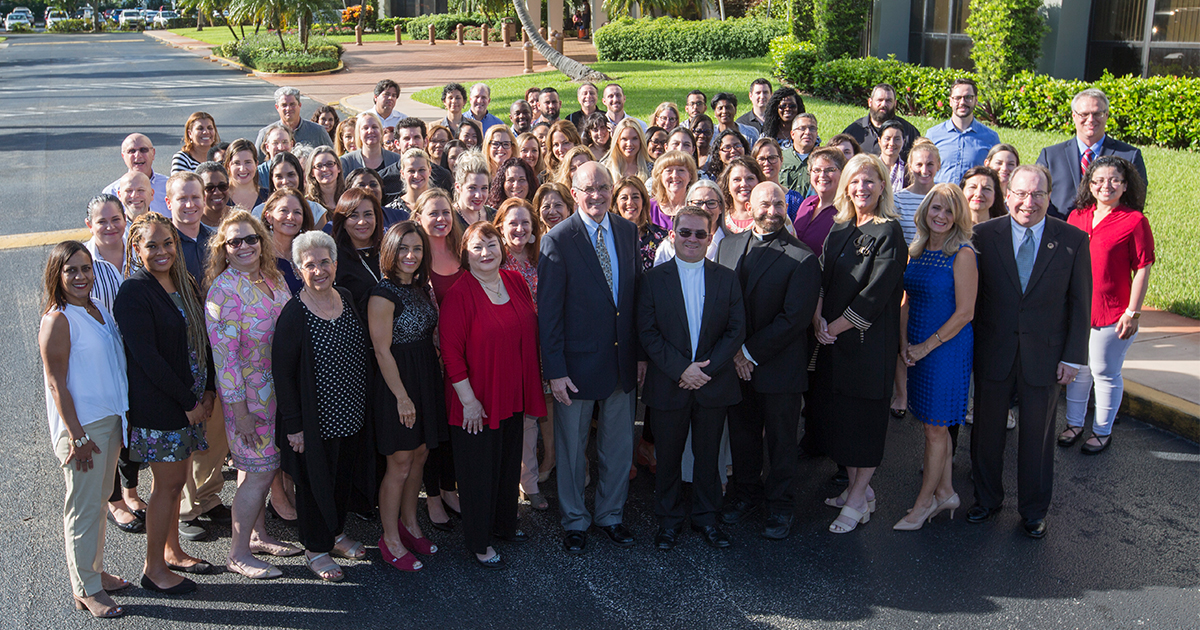 Father Luis Ferney Lopez Jimenez, secretary of the board of the Populorum Progressio Foundation, with the staff of Cross Catholic Outreach

St. Pope John Paul II founded the Populorum Progressio Foundation more than 25 years ago. With headquarters in Bogota, Colombia, Populorum Progressio’s mission is to show the Love of God and support of the Holy Father to as many poor communities in Latin America and the Caribbean as possible. Populorum Progressio was part of Pontifical Council Cor Unum, but it is now part of the Dicastery for Promoting Integral Human Development.

At the request of Cardinal Turkson, prefect of the Dicastery, Cross Catholic Outreach is forming a long-term collaboration with Populorum Progressio and has committed to fund at least 15 projects in Colombia, Peru, the Dominican Republic, Venezuela, Cuba, Belize and Nicaragua in the coming fiscal year.

When he founded Populorum Progressio in 1992, St. Pope John Paul II hoped for an institution to show the pope’s closeness to the people who lack the most essential goods to live and who are often put aside by society and its authorities. Pope Francis has written, “The situation in Latin America requires a stronger commitment, in order to improve the living conditions of all, without excluding anyone, also fighting against injustice and corruption, so as to obtain the best results of the efforts deployed.”

Recently, the secretary of the board of Populorum Progressio, the Rev. Luis Ferney Lopez, visited with our president, Jim Cavnar, and the entire staff of Cross Catholic Outreach to share the 21st- century vision of Populorum Progressio to bring God’s love and mercy to as many communities as possible. He was very impressed with our outreach and our approach to serve the physical and spiritual needs of the poorest of the poor.

Cavnar, commented, “The foundation of charity is love, and it is our love for our brothers and sisters in Christ that inspires us to do everything possible to bring relief to the suffering and to promote each person’s dignity and their integral human development. Through our new relationship with Populorum Progressio, we aim to bring the Love of God to an expanded number of communities throughout Latin America.”