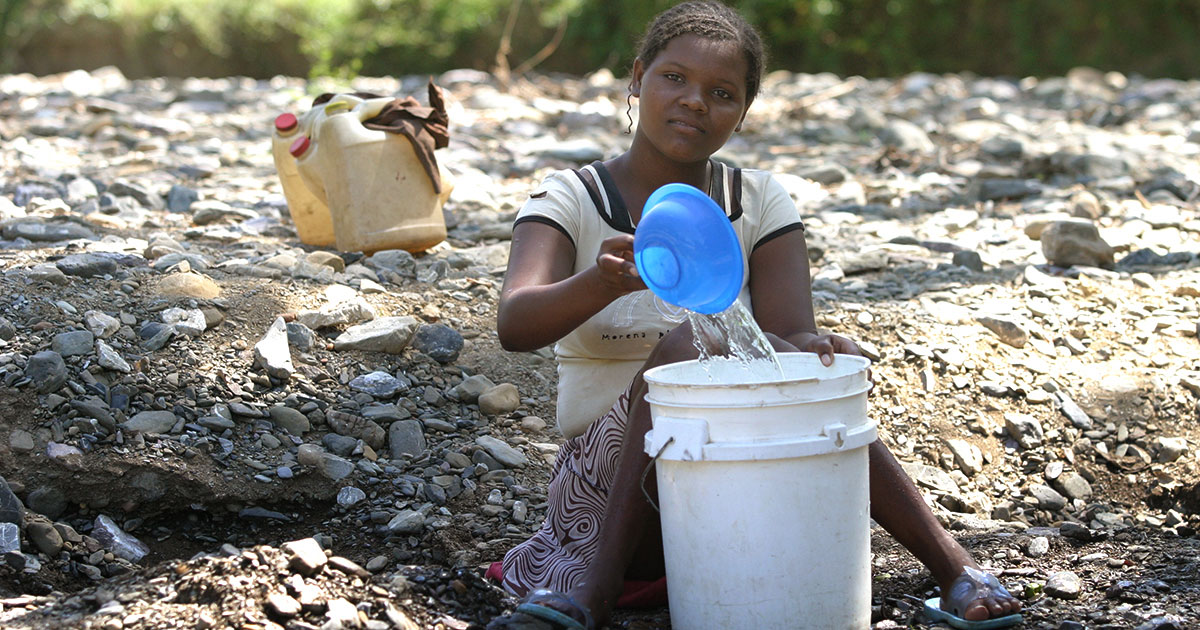 Many of us take clean drinking water for granted.  We turn on a tap and fill a glass. Simple.  However, for many parts of the world, including several communities in the Dominican Republic, access to safe drinking water isn’t this simple.

Take, for example, Sunilda de Beltre. Several times a day, this mother of four straps her youngest child on her back and goes out to fill her containers with water from the nearest creek. During the dry season, the situation is much worse. The water table drops, and Sunilda and her neighbors are forced to dig holes in the dry creek bed and wait for murky water to seep up and fill the cavity. After all this work, the amount of water is still too little for cooking, cleaning or farming — and it’s contaminated and risky to drink.  Simple meals like beans and rice become challenging because there simply is not enough water to fill the pot.

The Dominican Republic water shortage and lack of access to safe drinking water are major issues for families like Sunilda’s in the Dominican Republic. Fortunately, Sunilda’s community will be one of the beneficiaries of a new water system. Her family and her neighbors will soon have clean, safe water right in their home.

History of the Water Crisis in the Dominican Republic

The Dominican Republic is prone to natural disasters, and the occurrence of these disasters is becoming greater by the year. Between the years 1980 and 2008, for example, the country experienced 40 natural disasters that adversely affected about a quarter of the population. The most common natural disasters are hurricanes, flash floods, high winds, and mudslides. However, Dominicans in the Santo Domingo area have faced recent drought conditions, including many neighborhoods in the northwestern and southeastern parts of the capital region.

Not only do natural disasters destroy homes and displace people, they also damage agricultural crops and destroy sewage systems. This leads to reduced food production and contaminated water sources that put residents at risk of cholera and other serious diseases. Families like Sunilda’s have been heavily impacted by water shortages and fallen severely ill due to poor water conditions.

The water crisis in the Dominican Republic is largely due to the fact that water systems have been destroyed by natural disasters and contaminated with bacteria. Another issue here is when birds and other small creatures get trapped inside water tanks and die inside, producing a toxic mixture of water, dirt, and animal materials when rural residents turn on their faucets.

Some of the most contaminated water in the country is found near the Dominican border with Haiti due to the poor sanitary conditions. Diarrhea is a very common health issue among children, in particular and many do not have access to vaccinations for diarrheal diseases, which exacerbates the problem. This is a tragic reality for children growing up in the Dominican Republic today.

Related: Hardships and Hazards Faced Due to Natural Disasters in Dominican Republic

Donate to Provide Water for the Poor

Drinkable water can be expensive to buy and difficult to find in the Dominican Republic, as water-selling trucks don’t typically service the same areas every day and charge higher prices than rural residents can afford. Meanwhile, drinking water is often mistakenly stored in dirty containers, which ends up contaminating the otherwise-safe water.

For many rural Dominicans, like Sunilda, collecting water from other sources has become their only option. They typically travel long distances to collect it and then must boil away the impurities when they get back home. Families are often not educated about or do not follow recommendations for chlorinating water to make it drinkable, a process that involves adding five drops of chlorine to each gallon of contaminated water.

Related: Poverty in the Dominican Republic and How You Can Help

Our project involves building six water systems, supplying pipe water to 800 households, and providing safe water to 3,000 residents in need. We’re confident that these efforts will reduce waterborne illnesses in the Dominican Republic, ease the labor burden on women and children, and help farmers irrigate their land to improve their crops.

Learn how you can help provide clean, safe drinking water to families in the Dominican Republic, and other impoverished countries like Bolivia, Ethiopia, Guatemala, and more.

Related: Safe Water Changes Everything in the Dominican Republic

Problems and Solutions to the Education System in Ghana

20 Years Serving the Poor Around the World