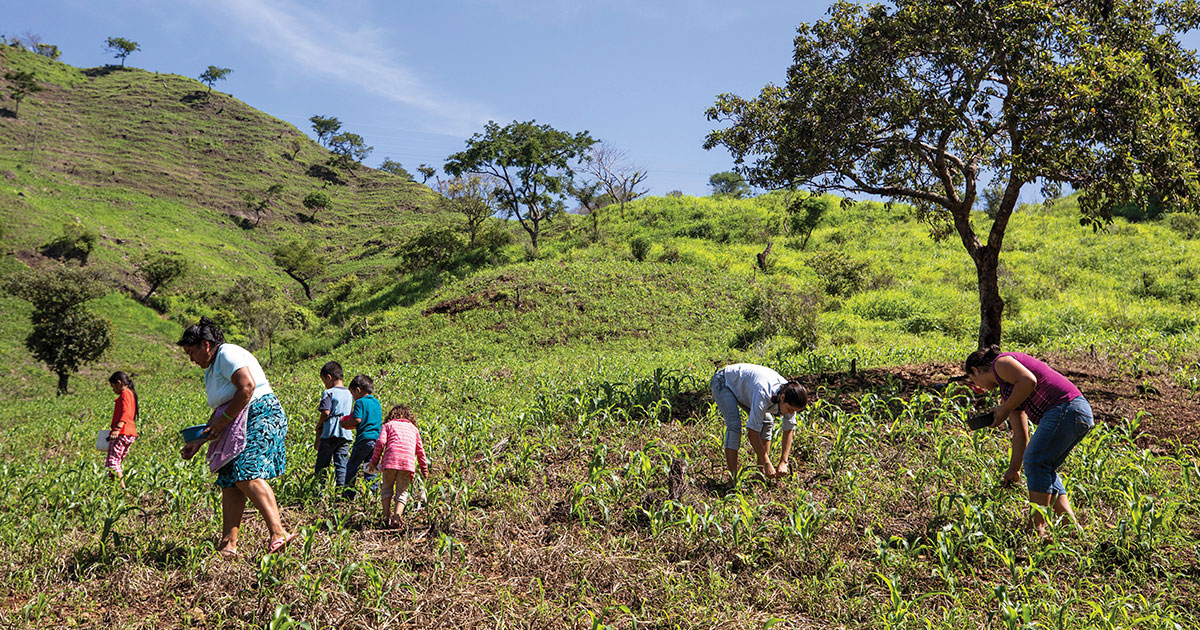 While Guatemala has the largest economy and population in Central America, it remains a priority for ministries serving the poor because more than half of its people live below the poverty line. One area receiving special consideration by Church leaders is Santa Rosa de Lima in the southern part of the country. There, poor families have been facing major hardships for generations.

The Church’s focus on rural Guatemala is no surprise, considering 71% of Guatemala’s poor live in those remote locations, typically surviving on subsistence farming. The poverty is so severe that the men in many households feel compelled to leave the country in search of jobs and greater opportunities to provide for their families. This often leaves women and children in precarious situations. Some rent small parcels of land, in the hopes of growing enough staple crops like corn and beans to meet their family’s needs. But earning a living this way is difficult – and the meager profits made generally belong to the land’s owners.

To create real, lasting change in areas like this, the Church must find ways to empower the poor and break the generational cycle of poverty that has plagued families for generations.

Compounding the problems faced by Guatemala’s poor, the country has also been experiencing its worst drought in 40 years. The lack of regular rainfall has been devastating to farming communities in the “Dry Corridor” who have seen their crops wither and die in the fields. This has caused famine in some places, with nearly half of the area’s children in some stage of malnutrition.

This drought, coupled with poverty and the lack of economic opportunity, has continued to spur emigration to unprecedented levels – especially from rural areas. There, men feel forced to leave in order to earn a living, and this has led to a significant number of Guatemalans living outside their country’s border.

Father Raúl Monterroso has a plan to transform Santa Rosa – materially and spiritually – with the help of Cross Catholic Outreach and our mission partners. The agriculture program is one of his favorites and is a major part of his plan to lift the poor out of poverty. While each component works hand-in-hand, according to Fr. Raúl – who has worked tirelessly to serve his community – agriculture leads to almost immediate transformation. If the people in his diocese are not able to work the land, they will have nothing. Farming helps transition families from simply surviving into being productive.

“This program is very close to my heart because it provides the daily bread for the people,” explained Fr. Raúl. “At the end of the harvest, families can sell their product, send their children to school, and buy medicines when needed.”

In the Santa Rosa agriculture program, farmers are instructed on crop management and environmental conservation. They attend training workshops on proven farming methods to improve yields. Each participating family will also be given seeds, seedlings and fertilizer to plant two acres of corn and enough citrus trees to improve their economic independence.

How You Can Help Improve Lives of Guatemala’s Poor

Cross Catholic Outreach is working closely with Fr. Raúl to share the transformative power of God’s Word in the Diocese of Santa Rosa. Together, we will not only bless the poor with an agriculture program, but also with new homes, access to clean water, and access to a Catholic education.

The agriculture program in Santa Rosa will transform the futures of over 1,500 villagers in 11 farming communities. Your contribution to this plan will improve their crop yields, keep their families together and help them achieve economic independence.

Sow the seeds of hope in places like Santa Rosa by supporting programs that empower the poor.