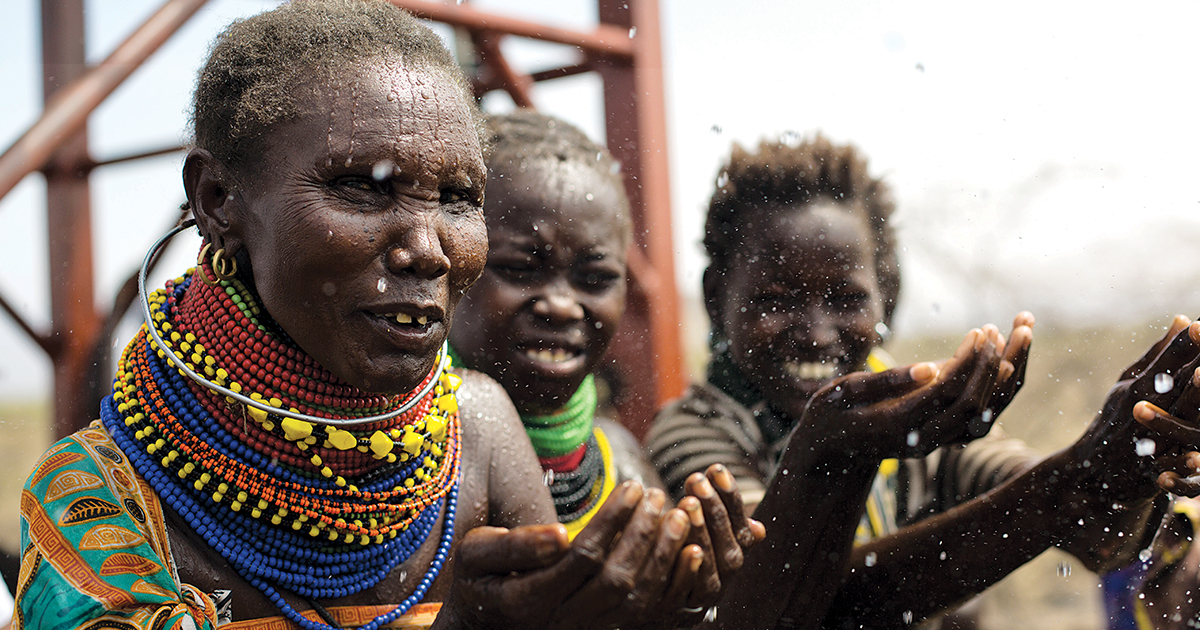 When I was in the Peace Corps, I spent three years in Ghana – two in a village and one in the capital city of Accra. There, I saw firsthand the effects a lack of water have on poor families, especially during dry season. Later, as the State Director for FARM Project, a USAID project in South Sudan, I also witnessed how deadly waterborne illnesses like cholera can be to a community. For months, I saw hundreds of people dying of cholera every day. Only when clean water could be distributed was the disease eliminated.

Now, as an international project manager for Cross Catholic Outreach, I work with ministry partners throughout Africa, and I am thrilled to be able take part in life-giving water projects. These outreaches impact thousands of people — many of whom faced a daily struggle to obtain clean water for their families.

Related: Quenching Thirst in the Diocese of Karonga, Malawi

Let me share my impressions of a specific project I visited last fall. I had gone to southern Kenya to visit one of my partners, Father Fabian Hevi. He’s a committed priest with a real heart for the poor, and he told me that his goal was to find solutions to the lack of water in the areas where he is called. Fr. Fabian explained how the Diocese of Machakos and the Archdiocese of Mombasa have approximately 90 communities in need of clean water.  He explained that both of these dioceses receive relatively little rain even during Kenyan’s rainy season. We had not worked in these areas before, but we knew that their needs were great and the hardships were extreme.

Fr. Fabian and I decided to start with two communities in each diocese. In the first year, we would make sure the communities could form the necessary Water, Sanitation and Hygiene (WASH) committees to make the project successful. They also needed a plan for the sustainability of the water system once it is drilled. Once this entire “Water for Life” campaign is complete, it will provide thousands of people with clean water.

During that same trip to Kenya, Fr. Fabian and I met with the local priests, elders and community members to assess and discuss their depth of their needs. Having seen the hardships water scarcity creates earlier in my career, my heart went out to them, but I also felt a sense of hope about their future. As I outlined about our plans to drill new wells and bring clean, fresh water, I knew it would produce transformative change.

When it comes to finding water in southern Kenya, the first two challenges are very basic: finding water in the ground and making sure it is safe to drink. The water in Kenya can have high heavy metal content so when we drill for water the Government of Kenya requires that all water be tested to make sure that it is safe. The town of Mbuvo perfectly illustrates these challenges.

People there travel long distances to collect water from the only source available — a dry riverbed. I watched as young men dug a deep hole to strike groundwater. Once that hard task was finished, they stood in the hole to gather the rising, muddy water. Working diligently, they filled 20-liter jerry cans for the crowd of people standing in line. Although this community service was free, the thirsty villagers gave them small donations in exchange for their hard work.

One of the villagers who received water from the riverbed was a 14-year-old girl named Syokwaa, who had been in line for several hours. Syokwaa was waiting for water rather than home studying during her school break, exams were coming up and she needed to study. She told me her family likes the river water better than the water in town because it is salty and because it is free.

Sadly, the river water is also contaminated. If it is not properly treated, Syokwaa and her family will most assuredly get sick. Waterborne illnesses are especially hard on the very young and the very old. But it affects everyone. When children can’t go to school, and parents can’t work, everyone is destined for a life of poverty.

The Cost of Water in Kenya

I met up with the last person in line — a 43-year-old woman named Penninah Muema, who had brought four donkeys with her (each donkey can carry 5 jerry cans), and she really illustrated the third challenge in the search for water — the cost. When I spoke to Penninah, she explained how this river water was her only option. She needed to haul 20 jerry cans full of water. She could’ve gone to the market, but it was so far she would’ve had to hire a taxi. That would’ve cost 20 shillings per can. At the riverbed, she only tips out one shilling per can and I only have enough for the daily necessities.  She told me that she wish she had water to farm at the house.

Every time I come home from a trip to Kenya, it reminds me how easy it is for us to take safe water for granted.   We turn on the tap and it flows. We want green lawns, so we turn on our sprinklers. We want to farm, so we irrigate. These blessings are challenges in many places in the world.

Learn more about our clean water programs around the world.

How Water Can Transform Kenyan Communities

Our current efforts in southern Kenya are not without precedence. Cross Catholic Outreach has partnered with Fr.  Fabian since 2013. At that time, donors contributed generously to bring much-needed clean water to the Diocese of Lodwar in northern Kenya. The results were nothing short of miraculous.

During 2017-2018, parts of East Africa, including Lodwar endured a severe drought that decimated livestock and food supplies. For the Turkana, who depend on animal herding for their livelihoods, the most devastating consequence of the drought was the loss of their herds.

First, we rushed emergency aid to drought-affected areas. Then we continued to provide deep-drilled water systems in the remote villages that continued to provide water during the drought, long after the existing Turkana wells had gone dry. Without these water systems that Fr. Fabian and Cross Catholic Outreach provided, many people would have died. Now the parish of Lorugum has water systems in all 27 of their outstations and they are a lifeline to a region in crisis, and a symbol of the love Christ extends through his Church to the poor.

Fr. Fabian said that before receiving the new water wells, the Turkana people could not understand John 4:13-14, where Jesus said, “Everyone who drinks of this water will be thirsty again, but those who drink of the water that I will give them will never be thirsty. The water that I will give will become in them a spring of water gushing up to eternal life.” This was confusing to them because they had never seen clean water or water spring up from the ground.

Now that the Church has provided clean water to the community, they understand – and they praise God.

Discover the impact of clean water programs in developing countries.

Within the next few years, with God’s blessings, the people of southern Kenya will have access to clean, potable water for the first time. What a tribute to the power of combined Catholic charity!

As an international project manager with Cross Catholic Outreach, Rebecca Riccitello monitors and manages our ongoing projects in Africa. With a master’s degree from the University of London and 10 years of project management experience in Africa — three years in the Peace Corps, two years managing development programs for USAID in South Sudan and five years managing other projects — she knows what effective, sustainable relief projects look like. Rebecca works closely with our in-country partners, ensuring funding requirements are met, projects’ scope, schedules and costs are on track and assisting with additional in-country partner needs.
Donations from this campaign will be used to cover any expenditures for this project incurred through June 30, 2021, the close of our ministry’s fiscal year. In the event that more funds are raised than needed to fully fund the project, the excess funds, if any, will be used to meet the most urgent needs of the ministry.