Called to Point the Way to Jesus

Except for Jesus and Mary, Saint John the Baptist is the only saint for whom the Church celebrates both the anniversary of his birth and death. St. John the Baptist is, in the words of Jesus, the “greatest of all prophets born of woman.” Thus, he is presented to us as a model and guide in our own lives as disciples in the world.

We are told of the death of John the Baptist in the gospels of Matthew and Mark. The drunken oath of a king with a shallow sense of honor, a seductive dance and the hateful heart of a queen combined to bring about the martyrdom of John the Baptist because he dared to speak the truth. The placement of the narrative in the gospel, however, tells us how we are to understand his death.  Both Mark and Matthew place the death of the Baptist in the midst of the sending of the Twelve into the world, their return, and the feeding of the multitude with loaves and fish.

Matthew tells us that Jesus, upon hearing of the death of John, wanted to be left alone in his grief. However, the crowds found him, and Jesus was moved with pity because they were like sheep without a shepherd. Whatever he might have wanted to do after John’s murder, the sight of the distressed people called him beyond his own need. Whatever his questions about his own ministry, the people gave him all the clarification he needed. Jesus spent the whole day ministering to the people, and when evening came and the disciples saw only the darkness and the hunger of the people, Jesus invited them to “feed them, yourselves” (Mt. 14:16).

Related: A Light to the Nations – Reflection on the Solemnity of the Nativity of Saint John the Baptist

Donate to Provide Food for the Poor

Before Jesus issued that invitation to his disciples, John had already lived the calling to the fullest! John, in the humility of truth and clear understanding, knew that his vocation was to point to the source of salvation, to form hearts capable of receiving the Lamb of God. His vocation was one of selfless giving. It is John the Baptist who has pointed the way to Christ. John’s life and death were a giving over of self for God and other people.

Through the grace of our baptism, each of us has been called to be God’s prophet in the world. Not one of us can be another John, and yet all of us are called to his very mission — to point the way to Jesus and move the world towards fulfillment in his saving grace. We do that by living our daily lives in acts of selfless giving, and acts of grace and charity to feed the hungry, clothe the naked, give shelter to the homeless and set prisoners free. In so doing, we liberate the poor from all that makes them unable to share in the fullness of life in Christ Jesus the Lord. 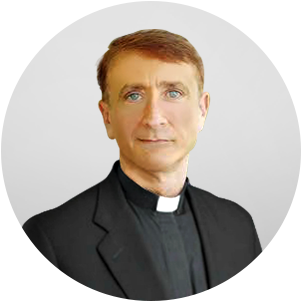 Rev. Bernard Olszewski is a priest of the Diocese of Saint George’s in Grenada and was ordained in 1979. He earned his doctorate in Canon Law from the Pontifical Gregorian University and is currently Associate Professor of Philosophy at SUNY Erie College. In 2016, Pope Francis commissioned him as a Missionary of Mercy.

Donations from this campaign will be used to cover any expenditures for General Haiti needs incurred through June 30, 2021, the close of our ministry’s fiscal year. In the event that more funds are raised than needed to fully fund the project, the excess funds, if any, will be used to meet the most urgent needs of the ministry.