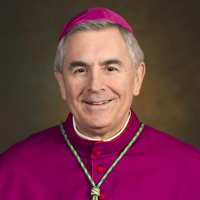 Dec. 4, 2020 — Cross Catholic Outreach is pleased to announce that His Excellency, The Most Reverend Ronald William Gainer of the Diocese of Harrisburg, has been elected as chairman of its board of directors.

Bishop Gainer succeeds Archbishop Thomas J. Rodi of the Archdiocese of Mobile, who retires from the Cross Catholic Outreach board after a decade of service.

“I offer my warmest congratulations to Bishop Gainer on his election as chairman of the board of directors,” said Jim Cavnar, president of Cross Catholic Outreach. “He has served as a director on our board for more than five years and has many talents that will be an asset to Cross Catholic Outreach as we extend our mission of bringing material and spiritual blessings to the poor.”

Bishop Gainer joined Cross Catholic Outreach’s board of directors in March 2015. His wealth of experience includes his service as president of the Pennsylvania Catholic Conference, the public policy arm of the 10 dioceses in Pennsylvania. He is also a member of the United States Conference of Catholic Bishops (USCCB), where he serves on several committees.

Bishop Gainer’s motto is, “From His fullness, grace upon grace,” a phrase taken from Saint John’s Gospel (John 1:16). He is outspoken about the virtue of charity, the importance of taking action to extend God’s love to those in need, and has endorsed the good works of Cross Catholic Outreach since 2014.

Following his retirement as chairman, Archbishop Rodi continues his leadership with Cross Catholic Outreach by serving on its bishops’ advisory board. Joining the board of directors in 2011, Archbishop Rodi assumed the role of chairman in 2013. Under his leadership, Cross Catholic Outreach expanded its global missionary outreach, provided more than $2 billion in goods and grants to the poor, and received pontifical approval as an official Catholic charity. We remain forever grateful for his love and support throughout the years.