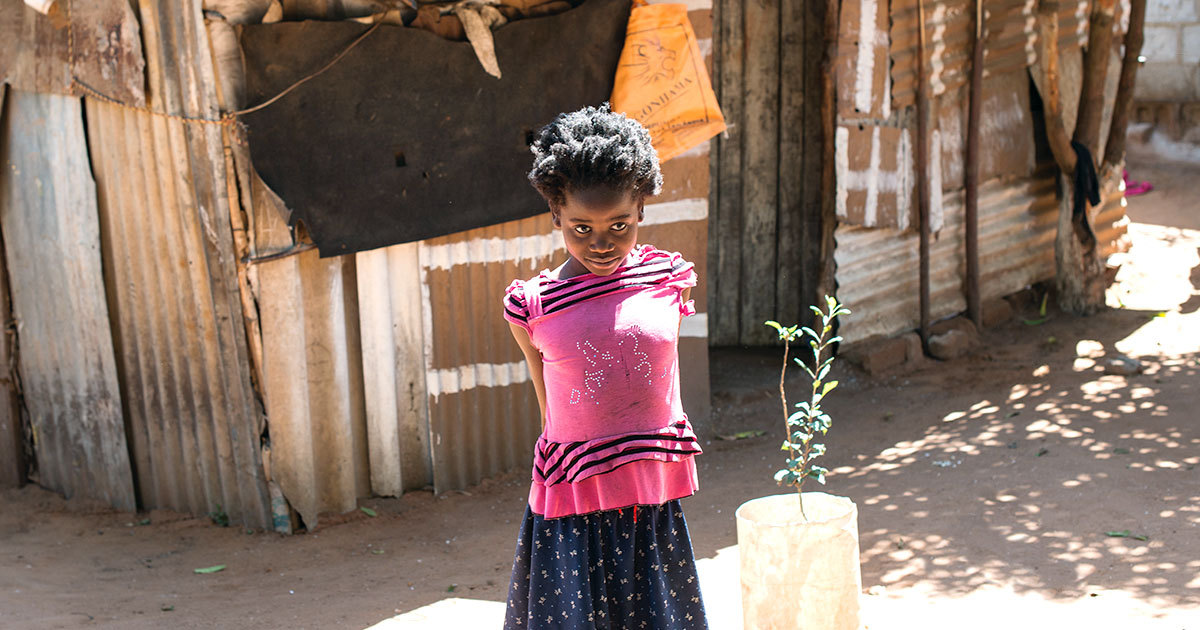 Understanding Mozambique’s Orphan Crisis and How You Can Help

Since its independence from Portugal in 1975, Mozambique, a country located on the southeast coast of Africa, has endured civil war, famine and the HIV/AIDS pandemic’s social consequences. The country has the world’s second-highest number of HIV/AIDS infections (CIA – The World Factbook), leaving an estimated 2 million children who have lost one or both parents (UNICEF).

When Cross Catholic Outreach President Jim Cavnar first visited Mozambique in 2003, he was shocked by the devastation that the pandemic had caused.

“At the time, there were no antiretroviral medications available to treat people with AIDS in Mozambique,” he recalled. “It was a huge epidemic at the time; there were hundreds of thousands of orphans left from people dying of AIDS.”

In those days, AIDS was a death sentence for poor Mozambicans. Once diagnosed, the poor and middle class would die just a few weeks later. Mozambique’s upper class were able to fly to South Africa and get antiretroviral treatments.

“Everywhere we went, we heard about the plight of orphans,” Jim continued. “I remember visiting villages, and you would look around and see older people and kids, but almost no one in between. The parents of almost all the children had died of AIDS. And now the grandparents were taking care of them.”

Since that first visit, much has changed in Mozambique. The government now provides antiretroviral medications to those battling AIDS. But the effects of losing an entire generation are still impacting society, especially the nation’s children and elderly population.

Some people have taken in as many as 10 orphaned children and are struggling to feed children of their own. As a result, many orphans have been left to fend for themselves, often begging on the streets or working odd jobs to survive.

Girls Are Most Impacted by Illiteracy

Young girls are particularly vulnerable in Mozambique’s orphan crisis. When girls are left orphaned, they often have to drop out of school to care for younger siblings. They are at greater risk of physical abuse, sexual assault, HIV infection, early marriage, drug problems, human trafficking and teenage pregnancy.

Many girls also face stigmatization in society and must overcome many social barriers, particularly when it comes to education. An old, local proverb puts it this way: “Sending a girl to school is like watering another man’s garden.” For this reason, family members may not educate a girl because they believe investing in her school work or job training will only benefit her future husband and his family. Because of this tragic mentality, almost half of the country’s women can’t read or write (CIA – The World Factbook), and they are left with few options to improve their lives.

Mozambique’s children are not the only ones suffering through Africa’s AIDS crisis; many of the nation’s fragile elderly suffer because of the deadly impact of AIDS on their children’s generation.

Like orphans and vulnerable children who have no one to care for them, Mozambique’s vulnerable elderly find themselves in the same situation. Not only do they need health care and food, but also they often find themselves as the primary caretaker for orphaned grandchildren and other young relatives.

Association Cross Mozambique: A Holistic Ministry Called to Rescue Orphans and Vulnerable Children in the Name of Christ

After Jim Cavnar’s first visit to Mozambique, he knew Cross Catholic Outreach needed to be part of the long-term solution to the orphan crisis. We know that this cause is close to the heart of God. As the psalmist says, “Father of orphans and protector of widows is God in his holy habitation” (Psalm 68:5).

That’s why we partner with Association Cross Mozambique, run by a woman, Doroteia Balane, who has devoted her life to orphans. Doroteia feels called by the Lord to be a mother to motherless children in her community; that’s why ACM is rescuing the most vulnerable: orphans, widows and lonely older people.

“I am so happy because I am doing the job that I like, looking for people who are suffering and helping the children who need a mother,” Doroteia said. “Always I am asking God to give me a long life in order to use me for helping people in need.”

To help impoverished children, Doroteia and ACM take a holistic approach. Not only do they meet each child’s physical needs through food, education, preventive health care and other critical support, but also they address their spiritual needs. Bible study, prayer, and an emphasis on connecting with their church communities are essential.

“We have always fought for the well-being of those who suffer, following what the Gospel says: That we must feed those who are hungry, give drink to those who are thirsty, and clothe the naked,” said Doroteia, referring to Jesus’ words about ministering to the “least of these” in Matthew 25.

ACM starts by identifying orphans and vulnerable children and determining what services each child needs. Once children enroll in the program, an outreach worker makes weekly home visits to ensure that each child’s material and spiritual needs are being met.

In situations where the child lives with an overwhelmed extended family member or a sick or widowed parent, Doroteia and her team provide assistance and spiritual support to the entire family unit.

Support for Orphans and Vulnerable Children

Through the support of Cross Catholic Outreach mission partners, ACM provides monthly food staples to meet the nutritional needs of poor children. Along with basic food, children have access to health care and medicines, including regular home visits by a traveling nurse. Children also receive scholarships to attend school, along with free uniforms, books and school supplies.

ACM’s team of 12 outreach workers are assigned to six different neighborhoods in Maputo, Mozambique’s capital and largest city, located in the southern tip of the country. These outreach workers are the lifeblood of ACM’s ministry to children and the elderly. They make it a point to know each child they serve and their specific needs — including understanding their health conditions, keeping up with their homework, and teaching them about hygiene.

Especially for children living with older siblings, these outreach workers are like mothers and fathers — meeting and anticipating their needs, loving them unconditionally, and advocating on their behalf. 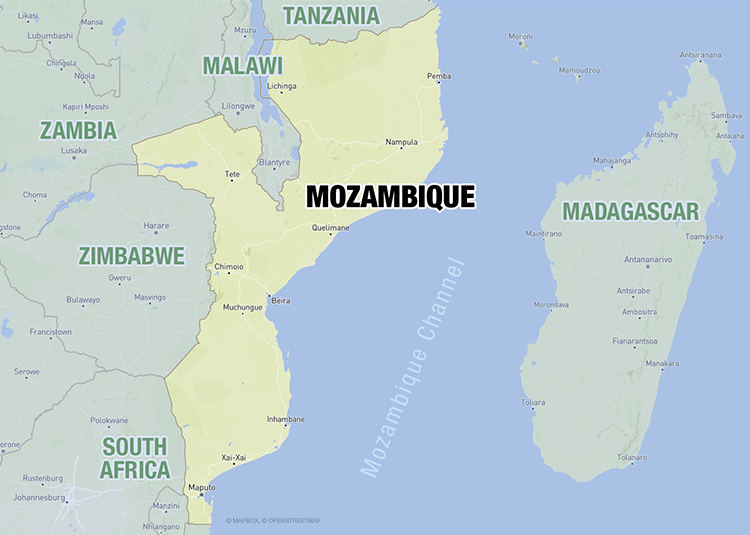 ACM is also committed to educating Maputo’s at-risk girls, providing scholarships to Catholic boarding schools. Girls of primary school age go to the Namaacha Boarding Home, run by the Franciscan Missionaries of Mary. Older girls live at the St. Joseph Institute, a boarding home run by the Franciscan Hospitaller Sisters in Inhambane. At each of these homes, girls receive a Catholic education and learn practical job skills to prepare them for the future.

ACM’s outreach workers bless the local elderly who are struggling to obtain food and meet other basic needs. ACM delivers food and medicine, provides home health care visits by a nurse, and provides life-giving friendship. In this worldwide time of isolation, Mozambique’s elderly need loving care and companionship more than ever.

Since Maputo’s poorest families tend to live in slums and houses with dirt floors, leaky roofs, and little or no security, while some own a single bed, most family members are expected to sleep on the floor. When a family takes in additional orphaned children, the situation becomes even more crowded and uncomfortable.

To address the need for safe shelter, ACM builds sturdy, cement-block homes with strong galvanized metal roofs. Every family who receives a home helps with the construction to the extent that they are able. Often, homes are built for widowed mothers who are HIV-positive, or sibling groups where an older child or young adult is head of the household.

Rescuing Children With the Power of the Gospel

ACM keeps Christ at the center of all they do because they recognize that Jesus is the only one who can fully and effectively transform lives for the better. Each week, the staff offers spiritual formation classes, teaching children the spiritual disciplines of Bible study, prayer and Catholic catechism classes. Father Anastácio Jorge, the spiritual director of ACM, is dedicated to imparting the truth of God’s Word onto young hearts.

“The most important thing is that this work is done inspired by the Word of God — which is our strength,” Fr. Jorge said. “It is our way. It is our light. It is in his Word that we find the reason for our action and the soul of our missionary work at a time like this.”

ACM is not just saving lives physically; it is impacting young souls for the Kingdom of God. Children are introduced to Jesus, the ultimate healer and rescuer for eternity. What a priceless gift!

How Catholics Can Help AIDS Orphans in Mozambique

You can be part of God’s rescue story for orphans and vulnerable children in Mozambique, giving them hope and healing in the name of Christ. With your financial support, you can change the lives of children who have lost everything, giving them hope for the future. Best of all, your help will share God’s grace and mercy with these precious little ones. Give now and rescue orphans!

Problems and Solutions to the Education System in Ghana

20 Years Serving the Poor Around the World