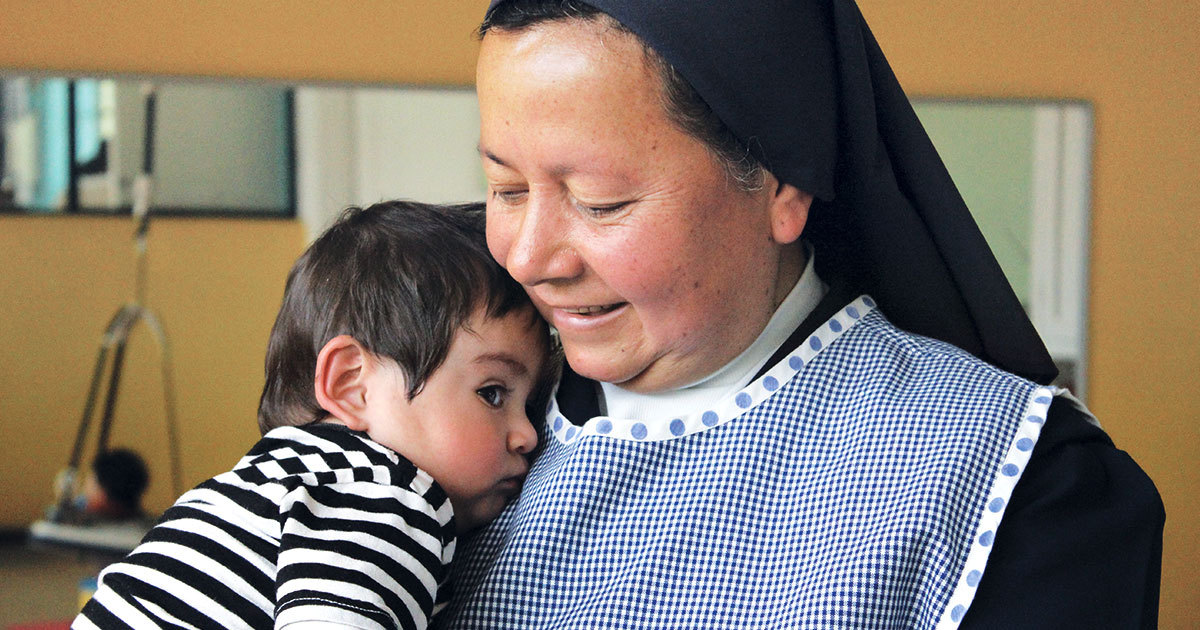 Orphans hold a special place in God’s heart, and the Bible makes that abundantly clear. In his epistle, James puts it this way: “Religion that is pure and undefiled before God, the Father, is this: to care for orphans and widows in their distress” (James 1:27).

Above all, the Lord has called his Church to care for the vulnerable — particularly orphans. To help accomplish this mission, Cross Catholic Outreach is dedicated to mobilizing Catholics across the U.S. to be the hands and feet of Christ on behalf of vulnerable children.

By upholding the value of orphans, Cross Catholic Outreach affirms the sanctity and dignity of all human life. As stated in the Catechism of the Catholic Church, “Human life is sacred because from its beginning it involves the creative action of God and it remains for ever in a special relationship with the Creator, who is its sole end” (CCC 2258).

By supporting ministries that care for orphans and vulnerable children, Catholics declare the intrinsic value of each life. All children are created in the image of God, and by prioritizing their safe birth and continued care, we draw closer to God’s heart to be a father to the fatherless (Psalm 68:5).

One hundred forty million orphans in the world have lost parents to AIDS, famine, war and other calamities. Sixty-one million of these children are in Asia, 52 million in Africa, 10 million in the Caribbean and Latin America, and 7.3 million in Eastern Europe and Central Asia.

The HIV/AIDS pandemic is still a significant contributor to the orphan problem; an estimated 17 million children have lost one or both parents in the crisis, with 90% of these children living in sub-Saharan Africa. Even though many advancements have been made in the fight against AIDS over the past several decades, children continue to suffer the most from the deadly ramifications of the pandemic.

What Is an Orphan?

Traditionally, a child had to lose both parents to be classified as an orphan, but the definition of the word has since been broadened by humanitarian organizations. Today, we use the terms “single orphan,” one who has lost one parent, and “double orphan,” one who has lost both parents, to convey the growing number of children in need of a new family, shelter, care or other services. That’s why many organizations use the term “orphans and vulnerable children,” because even though children may have a surviving parent, they still may require some type of assistance.

Unfortunately, the orphan problem doesn’t stop with children who have lost a parent. Many children have parents who are unable to care for them effectively for a variety of reasons, including extreme poverty, abandonment, addiction and neglect. These children are susceptible to living on the street and at risk of becoming victims of human trafficking or illegal child labor.

The orphan crisis is overwhelming, but Christ’s love is greater. The Catholic Church has a rich tradition of caring for orphans, widows and those in need.

In the Old Testament, the ancient Israelites were commanded to protect the fatherless and care for the widows in their midst. This commitment continued at the establishment of the Church. Early Christians were at the forefront of caring for vulnerable children and the poor, formalizing the acts of charity such as caring for orphans and the sick. In the fourth century, the Church established orphanages, which eventually were taken over by monasteries in the Middle Ages.

St. Augustine reiterated the importance of this work, stating, “Your piety knows what care the Church and the bishops should take for the protection of all men but especially of orphan children” (Epistles 252-255).

In developing countries without the same government programs, traditional orphanages still exist — and Christians are at the forefront of this movement. Dedicated Catholic religious orders and missionaries run children’s homes, child rescue programs, human trafficking prevention initiatives, and projects to help children infected by HIV/AIDS. American Catholics can be part of this vital missionary work of the Church.

St. Jerome Emiliani converted to Christianity while in a dungeon as a prisoner of war. Although he was a strong military commander, he realized he needed a Savior and could only gain true freedom by submitting his life to Christ. When he finally escaped, Jerome returned to his hometown of Venice and began studying to enter the priesthood. The city was recovering from the ravages of war, and Jerome felt compassion for the people who were suffering, especially the orphaned children.

Jerome took orphans into his home as his own children, giving them food, shelter, clothing and education. This work became the theme of his life — serve the poor children. He founded orphanages, a hospital, and a shelter that housed prostitutes. Even through personal sickness, Jerome remained committed to serving the “least of these.” His work eventually grew into an order of priests and brothers who primarily cared for orphans, the Clerks Regular of Somasca.

St. Jerome is the patron saint of orphans and abandoned children. Cross Catholic Outreach’s ministry partners are dedicated to the same mission as that of St. Jerome, to serve the suffering and vulnerable, especially suffering children.

How Catholics Can Help Orphans

How can you help orphans? Cross Catholic Outreach offers the opportunity to make a financial donation to support orphan ministries run by priests, sisters and lay missionaries who have committed their lives to service of the poor and orphan care in developing countries. Orphanages need financial support to meet growing children’s needs — food, medical care, safe shelter and education. Through generosity, we can all be part of God’s mission of mercy to vulnerable and abandoned children.

By providing care for children through 27 projects in 13 countries, Cross Catholic’s ministry partners are speaking “out for those who cannot speak” (Proverbs 31:8). Together, we share the hope of Jesus’ love with children who are desperate for hope and healing. For example, our ministry partners serve children affected by HIV/AIDS in Mozambique, rescue street children in Kenya, and provide a safe haven for abandoned babies in Ecuador.

You Can Be Part of the Solution

In the Gospels, Jesus demonstrates that children are precious to God and, as a result, should be dear to all of us. Jesus told his disciples, “Let the little children come to me, and do not stop them; for it is to such as these that the kingdom of heaven belongs” (Matthew 19:14). With your support, you will play a crucial role in the Church’s mission to declare the love of Christ to orphans and vulnerable children in developing countries around the world.

With your financial support, Cross Catholic Outreach’s ministry partners will be empowered to rescue and serve children longing for a family. As followers of Christ, we have a special responsibility to love and care for orphans, and this is our opportunity to share his love with children desperate for hope.

Give now and rescue orphans!

“Learn to do good;
seek justice,
rescue the oppressed,
defend the orphan,
plead for the widow.”