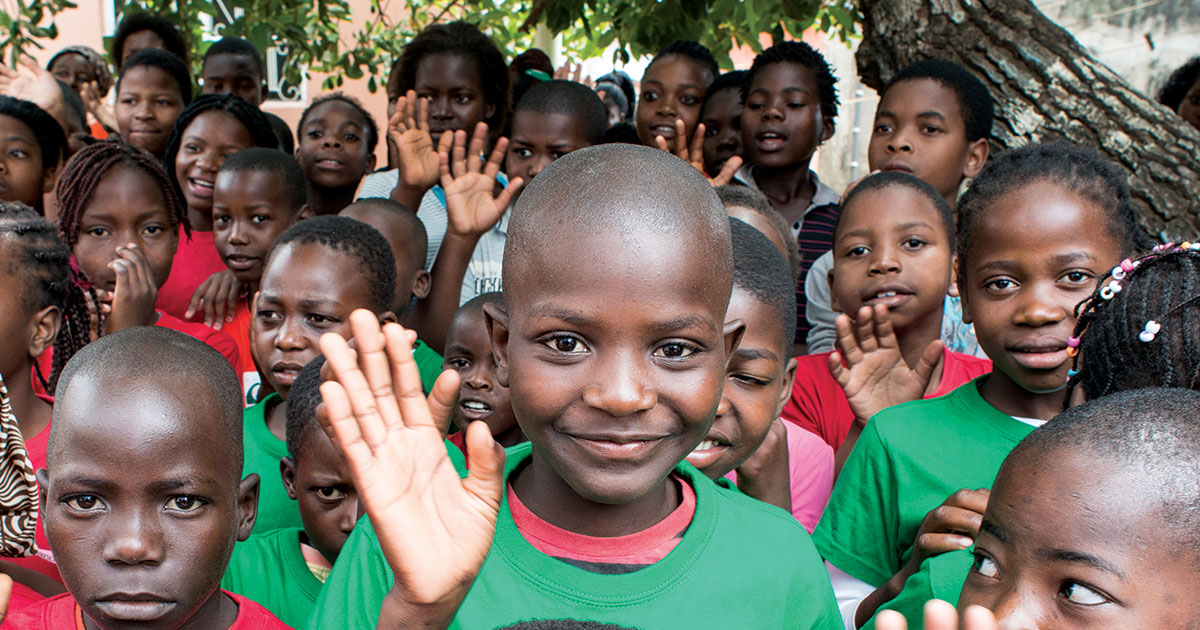 Poverty in Mozambique: How Catholics Can Bless Poor Children and Families

The sub-Saharan African nation of Mozambique has crippling levels of poverty, ranking 181st out of 189 countries on the United Nations Human Development Index (HDI). This creates hardships and challenges in every area of society, but it is especially threatening to vulnerable children and elderly populations.

Yolanda, who lives in the capital city of Maputo, is one example. She moved in with her grandmother because both of her parents passed away from AIDS, an ongoing blight on the nation that began in the mid-1980s and spread rapidly through the population. Her grandmother buys and sells vegetables at the local market, but like other vulnerable elderly citizens, she doesn’t make enough money to properly support Yolanda and her three siblings.

Children like Yolanda are one of the reasons Cross Catholic Outreach made Mozambique a ministry when it expanded into Africa. There, it partners with local missions to help change the future of children like Yolanda. Its approach addresses both material and spiritual needs, and it has accomplished major life and community transformations through a combination of practical support and spiritual formation. Association Cross Mozambique (ACM), one of these ministry partners, is a good example of Cross Catholic Outreach’s approach, providing Yolanda with daily meals and a monthly food parcel to share with her family.

“Before ACM, eating at home was really difficult,” she said. Yolanda goes to ACM each morning to eat breakfast, goes to school, then returns to ACM for lunch. The monthly basket of food is what sustains her family in the evenings.

What led to such severe conditions for Mozambique’s poor families? How can concerned Catholics help children like Yolanda break free from the generational cycle of poverty? Is it possible to build stronger and healthier communities? To understand the answers to questions like these, let’s take a closer look at the causes and specific challenges of Mozambique’s poverty crisis.

The Causes of Poverty in Mozambique

Mozambique is one of the most impoverished nations in the world. The CIA World Factbook reports that 46.1% of the 30.8 million Mozambicans live below the poverty line. The highest concentration of poverty is located in rural areas and the northern part of the country.

Although Mozambique has made great strides in reducing poverty over the past three decades, there is still much work to be done (UN University). High levels of poverty have real-life implications for poor families, leading to poor health outcomes, increased risk of malnutrition, low education levels, large numbers of parentless children and a seemingly endless cycle of generational poverty.

Portugal colonized Mozambique, which is why Portuguese is the country’s official language to this day. After years of Portuguese rule, Mozambique declared its independence in 1975. In 1977, a bloody civil war broke out, ravaging the country until 1992 (CIA World Factbook).

The fighting destroyed valuable infrastructure, including hospitals, schools and relief centers (A Complicated War, W. Finnegan). Some estimate that up to 1 million civilians died in the war, either due to famine or dying in conflict, with another 6 million people displaced.

The war was costly in terms of human life and capital. To this day, the most vulnerable members of society continue to suffer the consequences.

Not only were Mozambique’s citizens victims of a bloody civil war, but they also have suffered an unprecedented loss of life due to the HIV/AIDS pandemic. Mozambique has the second-highest number of people living with HIV/AIDS in the world. An estimated 2.2 million people live with HIV/AIDS, and 51,000 people die each year from AIDS (CIA World Factbook).

Now, people living with HIV/AIDS have treatment options such as antiretroviral medications, but for years, life-saving treatments were available only to the wealthiest in Mozambican society. AIDS was an automatic death sentence, killing an entire generation — leaving large numbers of vulnerable children and elderly as survivors.
AIDS is largely responsible for the country’s low life expectancy of 56 years and for the overwhelming orphan crisis (CIA World Factbook).

Related: Understanding Mozambique’s Orphan Crisis and How You Can Help

Natural disasters limit the poor’s ability to get back on their feet, with Mozambique considered the third most vulnerable country for disaster risk in Africa. In the past four decades, Mozambicans have experienced multiple droughts, floods, tropical cyclones and epidemics. Additionally, Mozambique’s farmers were recently plagued by the fall armyworm, an insect that destroys crops and vegetation.

Eighty percent of Mozambicans depend on agriculture for survival, most maintaining small subsistence-level farms. With so much of the population being agriculture dependent, natural disasters such as droughts or floods are devastating.

The Challenges of Poverty in Mozambique

A natural result of Mozambique’s poverty is food insecurity. According to the World Food Programme, 80% of people cannot afford to maintain an adequate diet, and the growth of 42.4% of children under the age of 5 is stunted. In rural communities, only 58% of people living in rural areas have access to a clean water source (CIA World Factbook). Getting food on the table is a struggle, and often, parents lack the resources to provide for the healthy growth and development of their children.

Because of the magnitude of the AIDS crisis, 2 million of Mozambique’s children have lost one or both parents (UNICEF). In traditional African society, orphaned children are taken in by close relatives, such as grandparents or aunts. But with so many orphaned children, surviving family members often don’t have adequate resources to meet the need. As a result, children end up begging on the street or fending for themselves, living in sibling groups to survive.

How Cross Catholic Outreach Is Fighting Poverty in Mozambique

Our Catholic ministry partners are meeting Mozambique’s challenges head-on with practical solutions guided by the compassion of Christ. With a strong focus on meeting the needs of orphans and widows, the Church meets material needs — food, water, shelter, education and economic empowerment — while ministering to spiritual needs through Catholic spiritual formation.

Cross Catholic Outreach is proud to partner with Doroteia Balane and ACM in finding solutions to the many hardships and challenges poverty brings. ACM is a ministry based in the capital city of Maputo and dedicated to rescuing orphans and widows in the name of Jesus. To achieve this, ACM’s staff provide food, education, medical care and safe shelter where the needs are greatest. They also make regular home visits to ensure orphans, vulnerable children and elderly citizens are receiving the support they need.

The ministry distributes monthly food baskets to children like Yolanda, and it enrolls at-risk elderly in the program to provide for their special needs. Children receive homemade meals daily at ACM’s headquarters, and the ministry also provides scholarships along with books, uniforms, school supplies and after-school tutoring to achieve educational goals.

In addition, ACM builds simple and sturdy houses for families living in dilapidated mud-and-stick huts. Recipients are usually single-parent families, but some are sibling groups who have lost both of their parents. These houses are a welcome relief for families who have experienced so much heartache!

ACM’s team of outreach workers makes periodic home visits to children enrolled in the program, ensuring that they’re making progress and having their most basic needs met. These outreach workers often act as surrogate mothers to the children, giving them direction, advice and even helping them with their homework.

ACM also focuses on girls’ education through its Girls’ Rescue Ministry. At-risk girls are awarded scholarships to attend Catholic boarding schools, where they are prepared for a future free from poverty while living in a caring environment with Catholic sisters.

The Missionary Sisters of the Precious Blood: the Tete Day Care Center and Impaputo Daycare Center

The Missionary Sisters of the Precious Blood are meeting the needs of Mozambique’s most vulnerable children and families through the Tete Day Care Center and Impaputo Daycare Center, located in poor and vulnerable communities. These day care centers are a safe place for children to spend time after school while their parents work hard to make a living. Through this practical support, children experience the love of Jesus through the sisters’ kindhearted ministry.

The Tete Day Care Center is located in the province of Tete in the west-central region of Mozambique. The center has a mission to provide holistic help to needy children and their families. The sisters fill hungry stomachs by providing children with either breakfast or lunch every day.

The sisters offer after-school tutoring and enrichment activities to improve basic literacy, math skills and language proficiency. A garden and kitchen at the center give children an opportunity to serve the ministry and gain valuable real-world skills. Food and hygiene products are distributed to the community’s vulnerable elderly and the blind.

The sisters run a similar outreach at the Impaputo Daycare Center, located in the rural community of Impaputo, near the border of Eswatini (formerly Swaziland). The center is where children can enjoy a hot meal, get educational support, receive help with basic needs such as hygiene products and receive spiritual edification.

The center provides day care and kindergarten for young children, after-school tutoring for older children, and vocational training in gardening and animal husbandry to prepare these disadvantaged children for a better future.

The sisters also provide Catechism classes, reinforce Catholic moral teachings, instruct the children on how to pray and encourage their frequent reception of the Sacraments.

How You Can Change the Future for Mozambique’s Poorest Families

The poor of Mozambique have faced many challenges: civil war, HIV/AIDS, agricultural instability and natural disasters. Committed ministry partners like ACM and the Missionary Sisters of the Precious Blood are dedicated to the future and well-being of the poor and vulnerable. Cross Catholic Outreach invites you to get involved in these missions of mercy.

When you bless the poor country of Mozambique, you will also be blessed. Sacred Scripture tells us, “In all this I have given you an example that by such work we must support the weak, remembering the words of the Lord Jesus, for he himself said, ‘It is more blessed to give than to receive’” (Acts 20:35).