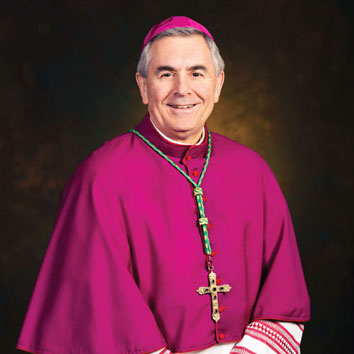 For two decades, Cross Catholic Outreach has supported Catholic missionaries around the world under the guidance of our board of directors. Last November, the board elected a new chairman to replace Archbishop Thomas J. Rodi, who stepped down from the role after nearly a decade. Comprised of seven U.S. Catholic bishops, the board elected Bishop Ronald W. Gainer of the Diocese of Harrisburg as the new chairman.

Commenting on his new role, Bishop Gainer said, “My time on the Cross Catholic board of directors has been a rich blessing. It’s heartening to see the love for the poor in the heart of Cross Catholic donors and to see how they are empowering Catholic missionaries all across the world. As Pope Francis often reminds us, we must be a Church that looks outward and takes God’s love to those on the margins of society.”

Born and raised in eastern Pennsylvania, Bishop Gainer was ordained to the priesthood for the Diocese of Allentown in 1973. In 2003, he was appointed bishop of Lexington by Pope John Paul II. He was later appointed bishop of Harrisburg by Pope Francis in 2014.