Ethiopia has a rich culture, but for much of the population, that blessing has not translated into material prosperity. The country is plagued by both rural and urban poverty, and many families face a daily struggle to secure even the most basic necessities. Cross Catholic Outreach works with compassionate people to support effective Catholic mission programs, relieve the burden on Ethiopia’s poor and produce lasting transformation in their communities.

Located in East Africa, Ethiopia has the second-highest population on the continent and the 13th highest in the world. Limited resources and a lack of job diversity make it nearly impossible for the country to support its more than 108 million people. Despite its growing economy, Ethiopia is still considered among the world’s poorest countries. Fortunately, active Catholic missions in the country are poised to provide help — if we can supply them with the resources they need to equip and run those essential outreaches.

Read on to learn more about our plan to strengthen struggling families in Ethiopia and how you can bring hope! 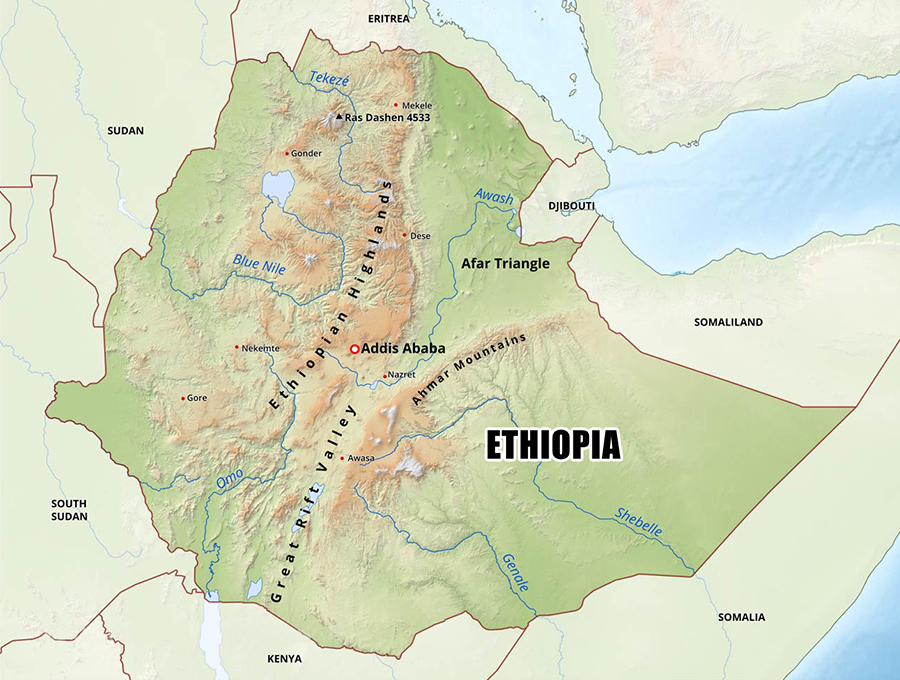 Most families in Ethiopia rely on farming for survival. With limited resources and opportunities, many vulnerable populations struggle to secure basic necessities.

The Problem in Ethiopia

More than 70% of Ethiopia’s people rely on the agricultural sector for work — a dangerous gamble in a region prone to periods of both flooding and drought. When environmental factors do not cooperate, much of the population suffers harsh economic damages. In 2015, Ethiopia experienced its worst drought in three decades. Many impoverished farming families lost their only source of income and nutrition as a result.

Throughout the years, violent wars, coups and ethnic conflicts have also served to damage the country’s infrastructure and prevent significant development. Educational opportunities remain severely limited, particularly for villagers in remote rural communities. At present, only about half the population has learned to read and write — and the statistics for women are even more disheartening. Oppressive traditional practices such as early marriage and female genital mutilation prevent advancement and keep many women imprisoned in poverty.

Ethiopia’s poorest households lack access to life’s most basic necessities, including food and clean water. In fact, more than 42% of the population does not have an improved drinking source, and 72% live without proper sanitation. High rates of malnutrition and infectious diseases prevail, putting lives at risk. Medical treatment is either unaffordable or inaccessible, as many families live too far from hospitals and clinics to seek professional care.

We are working to equip poor Ethiopian families with the tools they need to build a better life. Here, Nigistee Zahlay and her daughter, Brehan, stand outside a safe new home constructed through the Tigray Women Housing project.

The Solution to Ethiopian Poverty

A Light in the Darkness

Cross Catholic Outreach partners with Ethiopia-based Catholic ministries and missionaries that are working off of limited resources to share Christ’s light with the poor.

Break the Bonds of Poverty in Ethiopia

With your help, we can reach Ethiopia’s most vulnerable populations with food, water, safe housing, education, medical care and income-generating opportunities. Less than 1% of Ethiopia’s population identifies as Catholic — but your generosity extends the mercy of God and presents a powerful witness to the poor. Act now to empower Catholic ministries, break the bonds of material and spiritual poverty, and transform lives in Christ’s name!

Break the Bonds of Poverty in Ethiopia

Our Partners: Empowering the Poor in Ethiopia

Cross Catholic Outreach partners with several inspiring programs that are working day and night to serve the poor in Ethiopia. By supporting ambitious ministries such as the Brothers of Good Works and Tigray Women Housing, you can set entire families free from the crushing clutches of poverty.

Read on to see how these devoted servants are reaching out to bless both urban and rural communities — and discover how you can join them in making a difference! 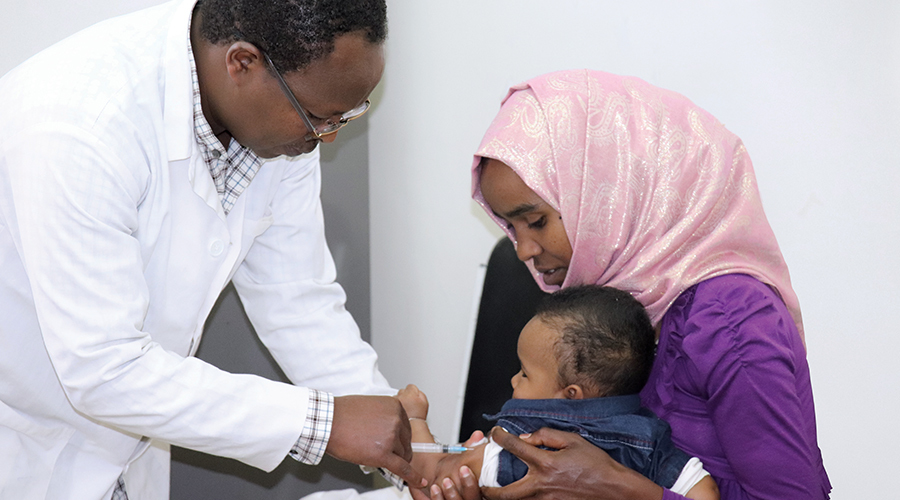 Since 2010, Cross Catholic Outreach has collaborated with the Brothers of Good Works to increase the self-sufficiency of poor families in Ethiopia’s capital city of Addis Ababa. This year, the brothers are committed to sharing Christ’s love with the sick and suffering by providing: 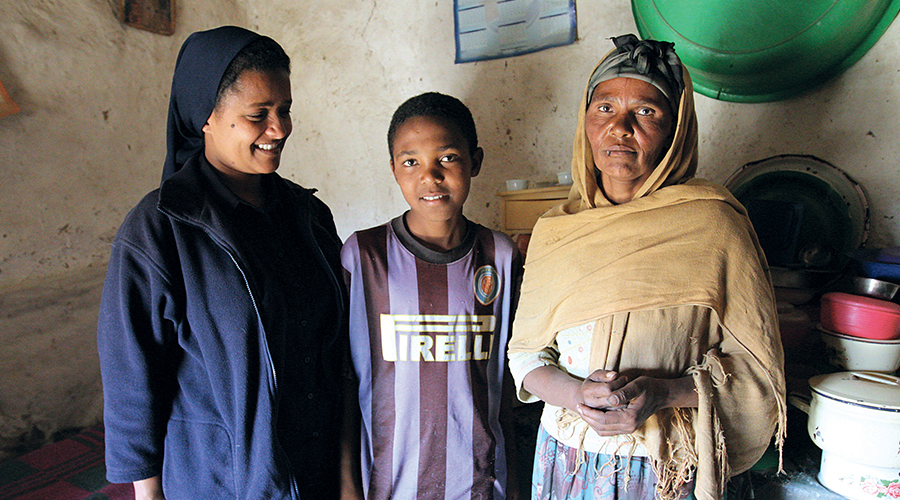 In Ethiopia, more than 2.9 million internally displaced persons have been forced to leave their communities, often as a result of ethnic-based violence. Many of these households are headed by single mothers. Their families lack access to shelter, education and livelihood opportunities that could help rebuild their lives.

The Daughters of Charity, through their Tigray Women Housing project, are committed to empowering these families by providing them with safe homes and helping them regain a sense of stability. This year, the sisters are working to:

For many of Ethiopia’s poorest families, everyday life is a fight for survival. Let the Holy Spirit work through your generosity to relieve their burdens, expand their opportunities and draw them into closer relationship with Christ and his Church.

By meeting urgent needs for clean water and other essentials, you can restore health and hope to the poor.

Restoring the Dignity of Ethiopia’s Most Vulnerable Women

How severe is poverty in Ethiopia?

In recent years, Ethiopia has made impressive strides toward economic growth and poverty reduction — and yet, with a GDP per capita (PPP) of just $2,200, it remains one of the world’s poorest countries. According to the CIA World Factbook, 29.6% of Ethiopia’s people live below the poverty line. The nation’s poorest families often lack access to basic necessities such as food, water, safe housing and medical care.

What are the primary factors contributing to Ethiopia’s poverty rate?

The vast majority of Ethiopia’s population relies on subsistence agriculture for survival, with poor families growing barely enough to put food on the table. Periods of wide-scale drought have inflicted major economic damage, destroying many families’ primary source of nutrition and income. A history of bloody wars and coups has also played a critical role in stunting infrastructural development. In addition, oppressive traditional practices and stigmas have prevented many women and minority groups from accessing opportunities for advancement.

What other issues stem from poverty in Ethiopia?

Impoverished families often struggle to secure proper nutrition. In 2016, the CIA reported that nearly one-quarter of all Ethiopian children under 5 are underweight. The poor also frequently lack access to clean water and improved sanitation, putting them at high risk for waterborne diseases such as typhoid and chronic diarrhea. Medical care is often unaffordable or inaccessible, as is education. Families in remote rural communities find it especially challenging to access opportunities and programs that may only be available in larger towns.

How can I help fight poverty in Ethiopia?

You can join the fight against Ethiopian poverty by:

(1) Praying for the poor and the ministries striving to serve them.

Your prayers and donations extend the mercy of Christ to those in desperate need, relieving their burdens, filling them with hope and helping develop long-term solutions that can bring lasting change. As it says in Isaiah 58:10, “If you offer your food to the hungry and satisfy the needs of the afflicted, then your light shall rise in the darkness and your gloom be like the noonday.”