For generations, the Church has played a significant role in fighting poverty in Haiti. While this has yielded improvements in the living standards of many families, nearly 60% of the country’s population — more than 6.4 million people — still lives below the poverty line. More must be done to end the suffering of these families!

Plagued by repeated natural disasters and decades of economic troubles, Haiti remains the poorest country in the Western Hemisphere. For generations, its resilient people have fought to survive without access to adequate food, water, shelter, health care and financial opportunities, but the hope of many is waning as the struggle continues. While Haiti-based ministries are striving to help the people in their neighborhoods, these priests, religious sisters and lay missionaries typically have very limited resources. Together, we can equip their missions of mercy to make a greater impact and strengthen Haiti’s families in Christ’s name.

Read on to understand the root causes of poverty in Haiti, the key challenges facing poor families and the steps you can take to make a difference! 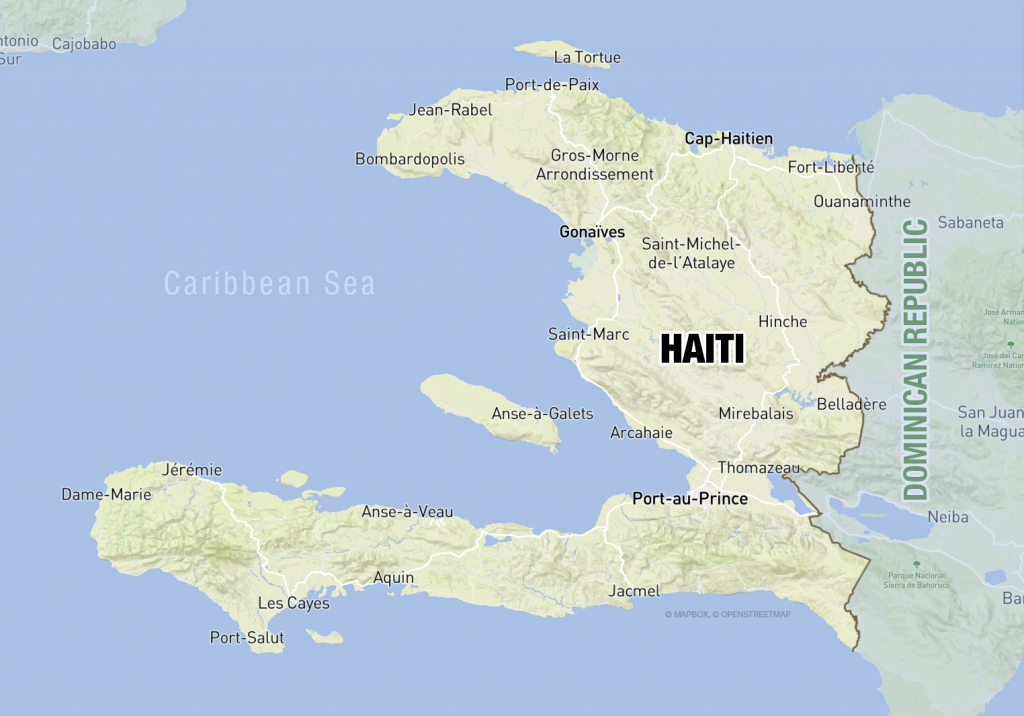 Monique Francois and her granddaughters stand outside their home. It was badly damaged by an earthquake in 2021. By supporting Haiti-based ministries such as Pwoje Espwa, we are able to repair homes and provide relief for families facing challenges like this.
(Photo courtesy of Overture International)

Poverty Rooted in a Colonial Past

Haiti is undeniably rich in culture and history, but its ties to French colonialism have also contributed to its long battle with poverty. In 1804, Haiti became the first country in the world to be led by former slaves — a success that intimidated slaveholding nations, including the United States. During this transition to independence, France forced Haiti to pay an indemnity of 150 million francs — the modern equivalent of $21 billion — to repay slave owners who had “lost” their property. To make matters worse, Haiti was shunned by many countries during this critical period, leading to a cycle of debt, corruption and widespread poverty.

Haiti’s Caribbean location has also made the nation vulnerable to natural disasters. In 2010, a devastating 7.0 magnitude earthquake killed more than 300,000 people and left more than 1 in 10 people homeless. Six years later, Hurricane Matthew made landfall as a devastating Category 4 storm, destroying homes, crops and livestock in the southern peninsula. Most recently, a 7.2 magnitude earthquake struck Haiti’s southwest Tiburon Peninsula in August 2021, claiming more than 2,000 lives and leaving hundreds of thousands of people in need of humanitarian aid.

Despite these many challenges, Haitians have persevered and hope prevails through the work of devoted Catholic ministries. While these outreaches have been an incredible blessing in struggling communities, even more must be done to overcome poverty and shine Christ’s light of hope in Haiti.

Neighbors Rose Fenelus (back) and Ilianese Michele (front) show the small pit where they used to collect water. Cross Catholic Outreach was able to fund a clean hand pump well for their community.

The Answer to Haitian Poverty

Cross Catholic Outreach is committed to addressing poverty issues in Haiti by working through Catholic bishops, priests, sisters and lay people who have the heart and knowledge to serve their neighbors in need.

Cross Catholic Outreach is working with Father Glenn Meaux and the Kobonal Haiti Mission to end poverty, support economic empowerment and inspire the spiritual transformation of families in one of the poorest parts of Central Haiti. For 30 years, Fr. Meaux has carried the light of Christ to an area once called the “darkest corner of the diocese.”

Break the Bonds of Poverty and Bring People to Jesus

More than providing food, water, shelter, medical care, education and other material needs, our goal is to transform the lives of individuals, families and communities for the glory of Jesus Christ. With your support, we can bless even more lives in a miraculous way.

Empower the Church in Haiti

Cross Catholic Outreach is currently working with about one dozen partners throughout Haiti. These devoted ministries serve with humility to spread the hope and love of the Catholic faith. Please consider supporting our brothers and sisters in Haiti, including the following worthy ministries. 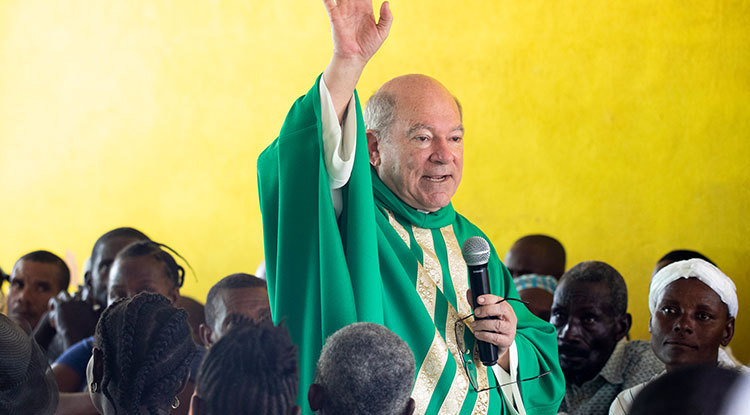 Father Glenn Meaux has raised up a thriving Catholic community in a village once dominated by fear, suffering and squalor. Many lives have been changed, but deep pockets of poverty remain. Your generous gift will equip the Kobonal Haiti Mission to minister to the needs of the poor through crucial outreaches, providing food, water, education and more. 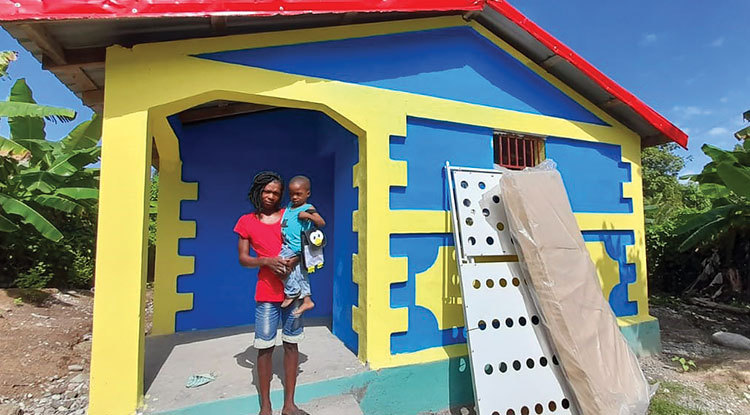 Many Haitian families live in crowded, unstable structures made from mud, sticks, discarded plastic and rusty scraps of metal. One strong storm can bring these patchwork shelters to the ground. That’s why Cross Catholic Outreach works with Pwoje Espwa in Haiti’s South Department. With your help, we can build sturdy homes that will transform the lives of families in need. 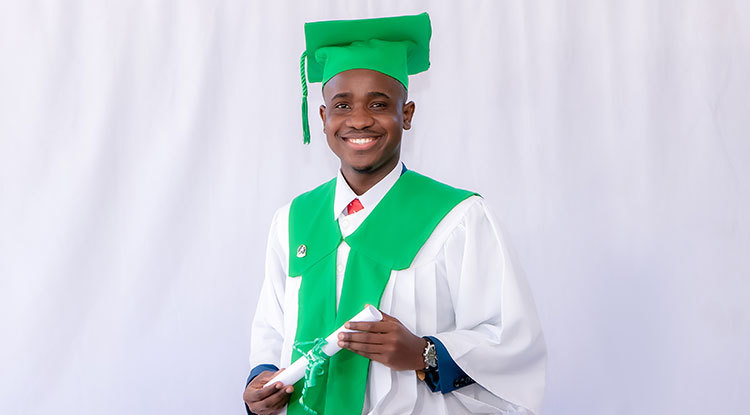 The first step to getting a good-paying job is to get a university degree — but many young Haitians cannot even afford the bus fare to school. This project gives poor but high-achieving students the opportunity to attend the University of Notre Dame, Haiti’s only Catholic college. With your support, deserving young adults can achieve their dreams and strengthen Haiti’s future. 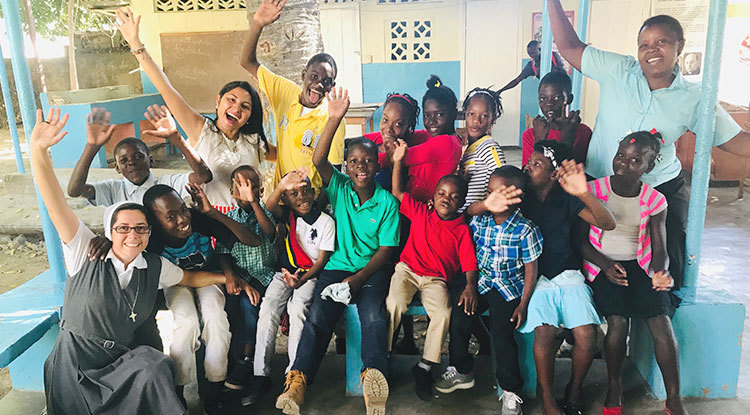 Tragically, vulnerable women and children are trafficked across the Haiti-Dominican Republic border and exploited for cheap labor or worse. Your generosity helps rescue these victims and bring them to a safe shelter. At this temporary home, they receive food, medical services and the healing love of Christ while social service networks strive to reunite them with loving families.

Your Gift Will Change Lives

Impoverished families in Haiti need your compassion. Your gift to Cross Catholic Outreach will keep the light of Christ shining brightly and will empower the Church in Haiti to serve the poor in many significant ways. Your gift can literally bring food to the hungry, water to the thirsty, shelter to the destitute and the peace of the Lord to the downtrodden.

How Spiritual Transformation and Clean Water Are Related

Prayers for Clean Water in Haiti: How Catholics Can Help

Hunger Across the World

Is Haiti the poorest country in the world?

What is the poverty rate in Haiti?

What causes poverty in Haiti?

Haiti was once the wealthiest country in the Caribbean because it was a key player in the sugar trade. Today, extreme deforestation and the destruction of natural resources for export have damaged the country’s potential for economic success. Poverty, instability, corruption, vulnerability to natural disasters, unemployment and persistent illiteracy are among the most serious obstructions to Haiti’s stability and economic growth. Haiti also experiences high rates of disease, unclean water, malnutrition and poor health care.

What is the best hope for Haiti?

The best hope for Haiti is provided by the Church’s commitment to holistic, transformative change — an approach that addresses both material and spiritual needs. This strategy also encourages greater self-sufficiency and restores the dignity of those being helped. Efforts of this kind have proven most effective, in part because they allow struggling families to lift themselves out of the cycle of poverty. This is an empowering process that builds confidence, encourages self-reliance and restores hope.

What causes hunger in Haiti?

The causes behind hunger are varied and complex. In Haiti, climate conditions play a contributing role, as frequent droughts, tropical storms and hurricanes destroy harvests. Deforestation and slash-and-burn farming methods have also decreased the availability of viable farmland. Additionally, instability and turmoil drive food costs up, making it difficult for families — particularly those in remote communities — to either afford food or access major shopping centers. In rural areas, contaminated water often causes vomiting and diarrhea, further sapping young bodies of critical nutrients. With all these factors working together, Haiti has one of the highest levels of food insecurity in the world. Nearly 10% of its children under age 5 are underweight.

According to the World Bank Group, Haiti is considered the most unequal country in Latin America and the Caribbean. Stark differences are most apparent between the cities and the countryside. Almost 70% of rural households are considered chronically poor, as opposed to 20% in urban areas, and more than half of Haiti’s people live in rural communities. While living conditions have gradually improved for many living in the city, rural families continue to face harsh challenges. Rural houses are typically one- or two-room dwellings made from mud, grasses, palm fronds, and scraps of plastic, wood and metal. These precarious structures offer little to no protection from the region’s frequent storms. In addition, rural residents often lack access to infrastructure that could improve their lives. For instance, only about 11% have access to electricity, and just 16% have improved sanitation.

Haiti has experienced a “brain drain” wherein the most educated citizens often immigrate to live and work in other countries. As such, the country faces a severe shortage of skilled medical workers. There are, for instance, only about 23 physicians for every 100,000 people. Quality care also remains unaffordable for many of the poorest families. The World Bank Group found that among households that did not consult a professional, 49% cited financial limitations. Lack of affordable, professional care and health education contributes to the very high risk of infectious diseases, including bacterial and protozoal diarrhea, hepatitis A and E, typhoid fever, dengue fever, and malaria. Haiti also carries the greatest HIV/AIDS burden in the Caribbean and has the 23rd-highest rate in the world. By supporting health programs and educating young professionals, we can empower Haiti’s people to improve their health and strengthen their communities.

Where did the 2010 earthquake occur?

On January 12, 2010, a magnitude 7.0 earthquake hit Haiti near Léogâne, about 16 miles west of the capital, Port-au-Prince. With at least 220,000 lives lost and approximately 1.5 million left homeless, this quake was the most devastating natural disaster ever experienced in the country. Ten years later, its effects are still being felt.