Poverty Relief in the Philippines

The Philippines, an archipelagic country in southeast Asia, has experienced economic growth in recent years. Still, a persistent wealth gap remains. Violent insurgencies and repeated natural disasters have also prevented many Filipino families from seeing the benefits of their country’s greater prosperity. Tragically, more than one-fifth of the population remains in poverty, and in rural communities, the ratio is often worse. The Filipino Catholic Church is striving to meet the most critical needs of struggling men, women and children, but its ministries are working on limited resources. Your support can strengthen these Catholic outreaches and empower families to overcome even their most formidable obstacles.

21.6% of the Philippines’ overall population lives in poverty — and in some areas of the south, that number is as high as 75%.

According to the CIA World Factbook, the Philippines is the country that is most exposed to tropical storms. Frequent hurricanes, typhoons, tsunamis and other natural disasters inhibit the agricultural sector and prevent infrastructural developments that could improve the lives of the poor. With a large population and a limited number of well-paying jobs, the nation faces significant challenges in providing impoverished families with ample opportunity for advancement.

Cross Catholic Outreach is working hard to uncover the root causes of poverty in the Philippines and mobilize the Church to address the hardships faced by struggling families. There are practical steps you can take to make a difference! 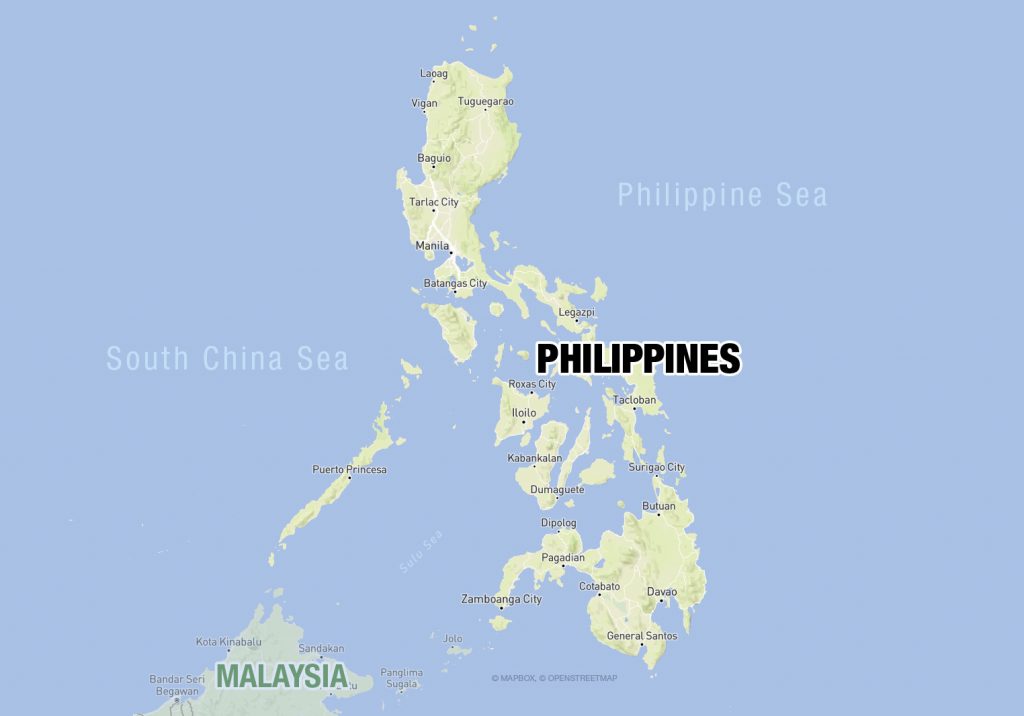 Many Filipino families have lost their homes due to natural disasters. Unable to afford safe housing, they build flimsy structures of wood, palm fronds and scraps of tin, which offer little protection against the elements.

In an average year, the Philippines is affected by about 15 cyclonic storms. Of these, approximately nine typhoons make landfall and five cause significant destruction to land, homes and businesses — not to mention lives. In addition to being situated on the typhoon belt, the country also rests along the Ring of Fire, where up to 90% of the world’s earthquakes occur and 75% of the world’s active and dormant volcanoes are located. Natural disasters pair with widespread deforestation to cause soil erosion and landslides, which create further damage and inhibit agricultural success. Families struggle to maintain a sense of stability as they grapple with one disaster after another. Patterns of evacuating and rebuilding leave little room for progress.

With limited opportunities in the agricultural sector, many workers find employment in the services industry. The Philippines has the 12th largest population in the world, however, and its territory is only slightly larger than the state of Arizona. There simply aren’t enough well-paying jobs to go around, and about 40% of the workforce is employed in the informal sector. Additionally, about 17%-18% of the workforce is considered underemployed. The government is working to address the wealth gap, improve the infrastructure in poor communities and increase the ease of doing business. Still, many other issues compete for its attention and resources, including crime, corruption and activity from terrorist groups. According to figures from the World Food Programme, about 40% of families in the city of Mindanao have been displaced at least once because of violence.

With many challenges to overcome, 21.6% of the overall population lives below the poverty line, and in certain areas of the south, that number is as high as 75%. Poor families struggle to secure basic necessities — such as safe housing and food — and more than one-fifth of the children under 5 are underweight. They also face a high risk of infectious diseases, such as bacterial diarrhea, typhoid fever, dengue fever, and malaria, as well as a polio outbreak that began in 2019. In order to improve their health, economic stability and overall quality of life, poor Filipino families will need access to immediate aid, opportunities for education and advancement, and the healing knowledge of God’s enduring love!

Relieve Poverty in the Philippines

By working with such partners as the Daughters of Wisdom, we can provide vulnerable children and their families with proper nutrition, medical care and other essentials.

Relief for the Philippines

In the Philippines, compassionate ministries are striving to relieve the burden on impoverished families and come alongside them as the hands and feet of Christ. Cross Catholic Outreach seeks to empower their incredible work by sending financial support, shipping material aid and providing professional consultation for relief projects.

Help Fight Poverty in the Philippines

When you donate to Cross Catholic Outreach, your gift directly supports the devoted ministries and missionaries who are working “in the trenches” to serve those in desperate need. Your generosity will fuel the efforts of devoted ministries that are working tirelessly to distribute lifesaving nutrition, build safe homes, provide medical care and equip struggling families with the tools they need to build a brighter future.

Help Fight Poverty in the Philippines

Featured Partners: ANCOP and the Daughters of Wisdom

Rather than launching its own outreaches, Cross Catholic Outreach comes alongside existing ministries that are working to strengthen the poor in the Philippines. With your help, we can empower devoted Catholic partners such as ANCOP and the Daughters of Wisdom, equipping them with the resources they need to effectively serve their communities.

Answering the Cry of the Poor (ANCOP) 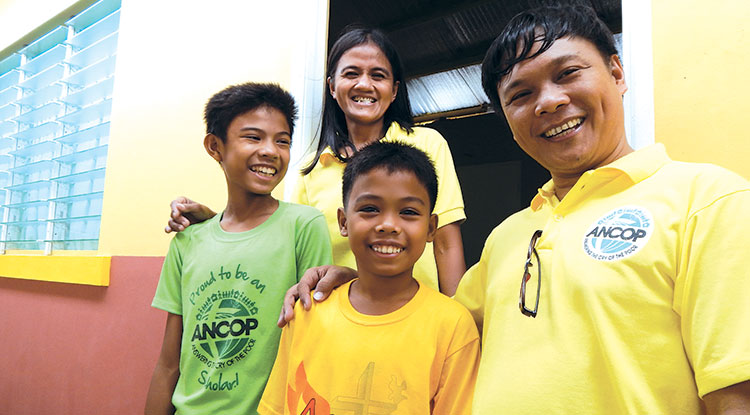 Answering the Cry of the Poor (ANCOP) is the humanitarian arm of Couples for Christ (CFC), a Vatican-recognized lay organization that is devoted to “bringing Christ’s transforming love to the poor.” ANCOP’s headquarters is located in Mangga, Cubao, Quezon City, which is part of the Diocese of Cubao. The ministry works to empower poor communities and nurture authentic life change by meeting material needs and facilitating family discipleship programs.

Since 2006, Cross Catholic Outreach has helped ANCOP build hundreds of homes for needy families and funded operational support for their successful social development programs. This year, the ministry hopes to build homes for 23 families that currently live in hazardous areas of Legazpi City, which are especially susceptible to typhoons and flooding. 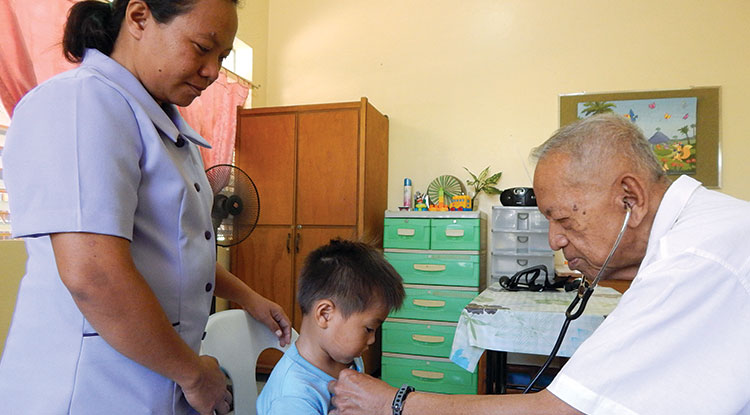 Christ has called his disciples to serve “the least of these,” and the Daughters of Wisdom take that commission to heart. The sisters share God’s tender mercy with those who need it most, ensuring that impoverished children and families have access to necessary medical care and life-changing education.

Cross Catholic Outreach is working with the Daughters of Wisdom in Manila and Cebu City to provide:

How to Help the Philippines

Together we can strengthen works of mercy in the Philippines. Your gift will encourage and equip devoted ministries, providing them with the funds and other resources they need to accomplish their missions. It will also bring priceless relief to those in desperate need, addressing their most pressing challenges and empowering them to achieve long-term transformation.

Your gift will answer the prayers of the vulnerable, providing them with health, peace and encouragement in Christ!

What is the poverty level in the Philippines?

According to the CIA World Factbook, more than one-fifth (21.6%) of the Philippines’ population lives in poverty. In certain areas of the south, it may be as high as 75%. Though the economy has experienced growth in recent years, that has not led to significant poverty reduction, and economic inequality remains high.

What is the main cause of poverty in the Philippines?

Various factors contribute to the persistence of poverty in the Philippines. These include frequent natural disasters, violent conflicts and attempted coups, a rapidly expanding population, a limited number of lucrative jobs, and an underdevelopment of the agricultural sector.

What are the main trends and issues in education in the Philippines?

Although primary and secondary education are offered for free in the Philippines, only primary education is required by law. In addition, the quality of schools varies widely by region. As a result, many youths in poor communities have little motivation for completing their studies, and the dropout rate remains high. Boys in poor communities often leave school in order to find work and help support their families, while many girls marry and start families at a young age.

What are the living conditions in the Philippines?

Living conditions in the Philippines vary widely based on region and household income. The poorest families often establish informal communities, squatting on abandoned plots of land and constructing small huts out of wood, palm fronds, fabric and scraps of tin. Because they do not own their land, these families are at constant risk of displacement, and their feeble dwellings offer little protection against the region’s frequent storms. Due to their informal nature, they also often lack access to electricity, running water and proper sanitation. As a result, health risks run high.