During a recent staff gathering, Jim Cavnar, president of Cross International Catholic Outreach, gave a retrospective of 2009. We marveled at how God blessed our ministry, especially during these tough economic times.

To-date, through the support of compassionate American Catholics, Cavnar announced we had shipped $150 million worth of much-needed goods, including food, medicines, and medical supplies, to the poor in developing countries; and we had granted $3.8 million in financial aid to Catholic ministries overseas serving the poor through projects such as feeding, housing, schooling, and disaster relief.

Citing scripture from James 2 and Matthew 25, Cavnar’s take on why we’ve experienced such success was profound: God loves the poor. He moves hearts and wallets and people and circumstances to see that the prayers of the poor get answered. Through the ministry of Cross Catholic, God has been answering their prayers, because he loves the poor so very, very much. We have been blessed to be an instrument of His love for them.

God bless you for your prayers and gifts to the poor in 2009. 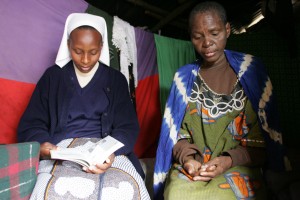 Has not God chosen those who are poor in the eyes of the world to be rich in faith and to inherit the kingdom he promised those who love him?      (James 2:5)