Between serving as a guide and translator for an NBC news crew and personally delivering pillows for all the beds at the main Project Medishare hospital in Haiti (as he put it, “My vehicle looks like a giant cotton ball!”), Cross Catholic Projects Officer Michael Wilson has successfully established a food distribution network in the greater Port-au-Prince area and the badly damaged cities of Leogane and Jacmel. 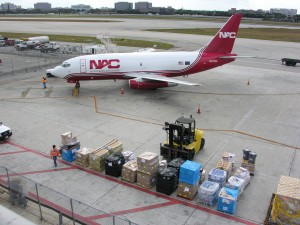 The food recipients include long-term Cross Catholic partners such as the Bethsaide short-term shelter in Jacmel, as well as internally displaced persons (IDP) camps where many earthquake refugees are now living. These groups will benefit from a $1.3 million shipment of emergency supplies that Cross Catholic arranged to be airlifted to Port-au-Prince in two C737 cargo planes over the weekend. The shipment includes 50,000 lbs. of fortified rice/soy casserole, bagged corn, water, an electrolyte replacement drink, tarps, and diapers, and is now being stored in a partner’s warehouse near the airport, where the goods are already being picked up for distribution.

Michael also reported that one of the orphanages Cross Catholic is supporting has now relocated from Leogane to an open field in Tabarre, where the children are living in tents. On Monday, Michael visited a school in the Port-au-Prince area that was severely damaged by the earthquake and he assured the widow of the deceased headmaster that we will help them recover from their loss. Even as schools have reopened in unaffected areas of Haiti, there is much work to be done before children in Port-au-Prince will be able to return to school again.

Get more of the latest Haiti updates at crosscatholic.org/product-cat/project-catalog/disaster-relief/.