Cross International Catholic Outreach President Jim Cavnar and several staff members recently returned from a trip to Haiti. During their time in the earthquake-devastated country, they visited several of the ministries we are helping during this time of recovery.

In their first few hours on the ground the staff was struck by the empty streets of Port-au-Prince, which before the earthquake were teaming hundreds of vendors, children, cars, and animals.

“It was like being in a ghost town on the set of a Hollywood movie — it was unreal,” Jim said.

Michele Sagarino, vice president of development, added, “The lack of life in the streets and knowing what that means was very hard to process.”

The group from Cross Catholic met with Gladys Thomas, who runs an orphanage and Christian school we support just outside the capital, to survey the damage her ministry sustained. She told them that they’ll have to completely replace one of their buildings and rebuild the tall cement wall that protects their property from trespassers. She also said that her ministry has taken in 20 new children since the earthquake. 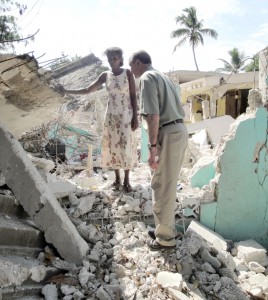 Jim Cavnar, president of Cross International Catholic Outreach, surveys the damage in Leogane where nearly all of the houses were destroyed by the quake. Cross Catholic is supporting an IDP camp of about 200 people who lost their homes there.

Jim and the staff from Cross Catholic also visited an internally displaced persons (IDP) camp we are supporting in Leogane, which was at the epicenter of the deadly earthquake. Despite the extensive destruction, there was hope among the people in camp. They had just received another shipment of rice when the group from Cross Catholic arrived.

After visiting a few other ministries we support, assessing damage, and planning an approach to help, the team from Cross Catholic stopped by Project Medishare’s tent hospital. Jim and the staff were very impressed by the work being done there — work that has been going on since the first day after the quake. Cross Catholic provided tents and supplies to the ministry, which were of great use when the ministry set up makeshift surgical and exam rooms, an infirmary, a lab, and a pharmacy.

Overall the group was impressed by the work we’ve accomplished together with our ministry partners to help those suffering in Haiti. “Our partners are showing tremendous courage and faith in the wake of this disaster,” Jim said. “Though it was difficult to see the suffering, we were glad to also find hope among the people as we met with our partners. We feel blessed to be a part of the recovery efforts that are bringing relief to those hurting in Haiti.”

Click here to learn more about our relief efforts in Haiti. 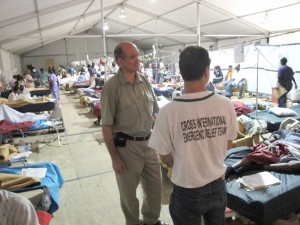 With tents and supplies from Cross International Catholic Outreach, Project Medishare was able to set up a makeshift hospital that is helping hundreds of earthquake victims in Port-au-Prince.