A Royal Miracle in the Philippines

When Mother Joan Clare first held little Prince and Princess, 17-month-old Filipino twins, they were only 6 ½ pounds. She tried to give them food, but they didn’t know what food was. She tried to give them milk, but they vomited what little they consumed. She says, “They were both suffering from severe malnutrition…they could not speak, walk, or even sit up. They were yellow from lack of blood, and too listless for comfort.”

She rushed the twins to the hospital, but she knew the odds of their survival were slim. The hospital found their blood so anemic it was like water, and Prince’s condition was the worst. His tiny veins were collapsing, making an IV or blood transfusion nearly impossible. Mother Joan says, “The skin color of Prince was a sickly, pasty yellow, and the look of death was on his face. I emergency-baptized the baby.”

Mother Joan knew it was time to call in divine forces. She pulled out her cell phone and sent a text to her priest, “FATHER WE NEED A MIRACLE!” His response: “I WILL PRAY AND HOPE YOU GET YOUR MIRACLE!” 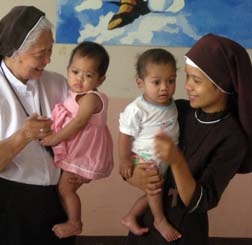 The next morning, Prince and Princess were still alive, and three IVs were finally feeding nutrients into Prince’s tiny body. A week later the twins were discharged into the care of Mother Joan at Cross Catholic-sponsored Queen of Peace Children’s Home. She says, “God never fails—I got my miracle!”