When Cross Catholic does projects in remote communities, just getting there is half the battle. You have to accept the fact that the roads will be too narrow, the hillsides will not have guardrails, and anything resembling asphalt will not exist.

Since I happened to be traveling through Nicaragua during the rainy season, I had an additional problem – mud. At one point, we took a detour through a farm to avoid an un-navigable strip of road, only to drive one of our trucks into ditch (thankfully, our Amigos for Christ hosts had the forethought to bring a winch). Later, we hit a dip so deep that our heads slammed up against the roof of the truck.

It seems that following Jesus’ footsteps is a ticket to a rough ride. You just have to bear the bumps with good humor, say a prayer under your breath, and thank God that you at least have motorized transportation – which the local people often do not. Expect pedestrians to hitch a ride on the bed of your truck, because you’re the only taxi in town, and don’t be surprised if what looks like a police checkpoint on a rural highway turns out to be a group of tired officers begging a ride home. 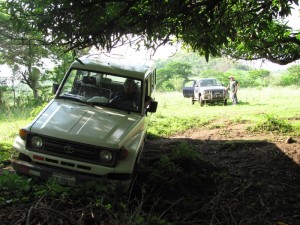 A winch comes in handy when traveling through rural Nicaragua.

The remoteness and rough terrain of the region are the reason why the Nicaraguan government has not developed much infrastructure. Just transporting a well-drilling rig over the crude dirt roads seems a near-impossibility, but our friends at Amigos for Christ have been doing it. With their expertise, our upcoming campaign to bring clean water to poor villages will be a huge success. And when the water begins to gush from the pipelines, into the hands of smiling children, we’ll be able to say that all the bumps and bruises were worth it.