Yesterday in St. Peter’s Square, Pope John XXIII and Pope John Paul II were canonized as saints by Pope Francis, with Pope Emeritus Benedict XVI also attending this historic event in the life of the Church.

“They lived through the tragic events of that century, but they were not overwhelmed by them,” Pope Francis said at the canonization. “For them, God was more powerful; faith was more powerful — faith in Jesus Christ the Redeemer of man and the Lord of history.”

Both of these saints accomplished many great things during their papal reigns, but they also distinguished themselves by their care and concern for “the least of these” in society. This is a characteristic we strive to emulate at Cross Catholic Outreach. 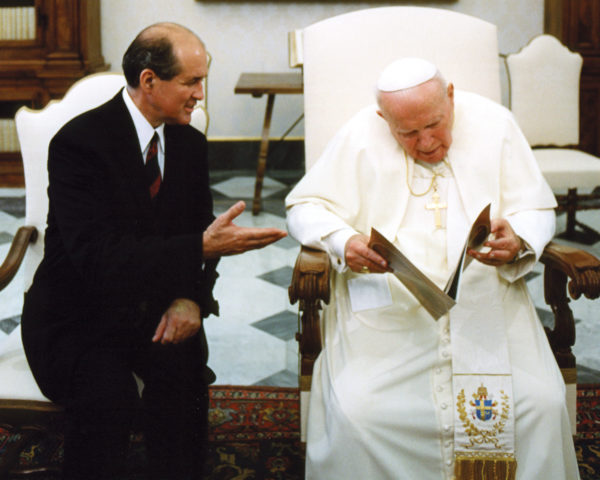 Known as the “Good Pope” by those closest to him, Pope John XXIII is probably best known for convening the Second Vatican Council in 1961. With a heart for his flock, Pope John was the first pope to leave the Vatican’s walls to visit local parishes, the sick in hospitals and inmates in their prison cells.

On his famous visit to a Roman prison the day after Christmas in 1958, he told the inmates, “You cannot come to me, so I come to you. … I set my gaze in your eyes; I put my heart close to yours.”

Pope John Paul II was well-known as a champion for the poor, and an advocate for the last, the least and the lost. He was instrumental in the fall of the iron curtain during the Cold War; and traveled to 130 countries during his pontificate—making him an ambassador of Christ’s love to all people.

In his famous address at Yankee Stadium in 1979, he told the American crowd, “You must never be content to leave them just the crumbs of the feast. You must take of your substance, and not just of your abundance, in order to help them. And you must treat them like guests at your family table.”

At Cross Catholic Outreach, we believe in following the example of the saints who have gone before us, like Pope John XXIII and Pope John Paul II. We want to give the poor more than just the crumbs from our feast, and want to encourage faithful Catholics in the U.S. to do the same.
As followers of Christ, we are grateful for the legacies to these influential popes who always sought to serve and build up the Kingdom of God and serve “the least of these.”

In the words of Pope Francis, “May both of them teach us not to be scandalized by the wounds of Christ and to enter ever more deeply into the mystery of divine mercy, which always hopes and always forgives, because it always loves.”