A “Founding Father” We Remember and Honor

Msgr. Michael Patrick Aloysius Flanagan was the first Outreach Priest to join Cross Catholic Outreach in 2002. As one of the “Founding Fathers” in the ministry, he preached with great passion for the poorest of the poor, always making his appeals personal and deeply moving for those who heard him. He was incardinated into the Diocese of Mandeville, Jamaica in 1997.

Msgr. Flanagan and I were made Monsignors together by Saint John Paul II in November of 1999. Bishop Paul Boyle of Mandeville presided over the ceremony.  Msgr. Mike had a great sense of humor and often disclosed he was “super priest” – complete with an “S” emblazoned T-shirt – as part of his retreat presentations and guest homilies. He truly enjoyed his priesthood and his ability to make a difference in the lives of the poor through his parish visits. He was also a good “brother priest” and would love to host gatherings for priests in his home.

We were blessed to have Msgr. Michael with us for so many years, and we invite the thousands of donors he brought into the Cross Catholic Outreach family to remember him in their prayers at this time of his passing. 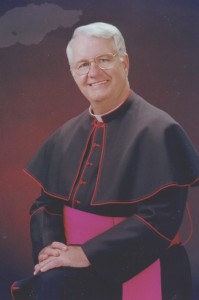