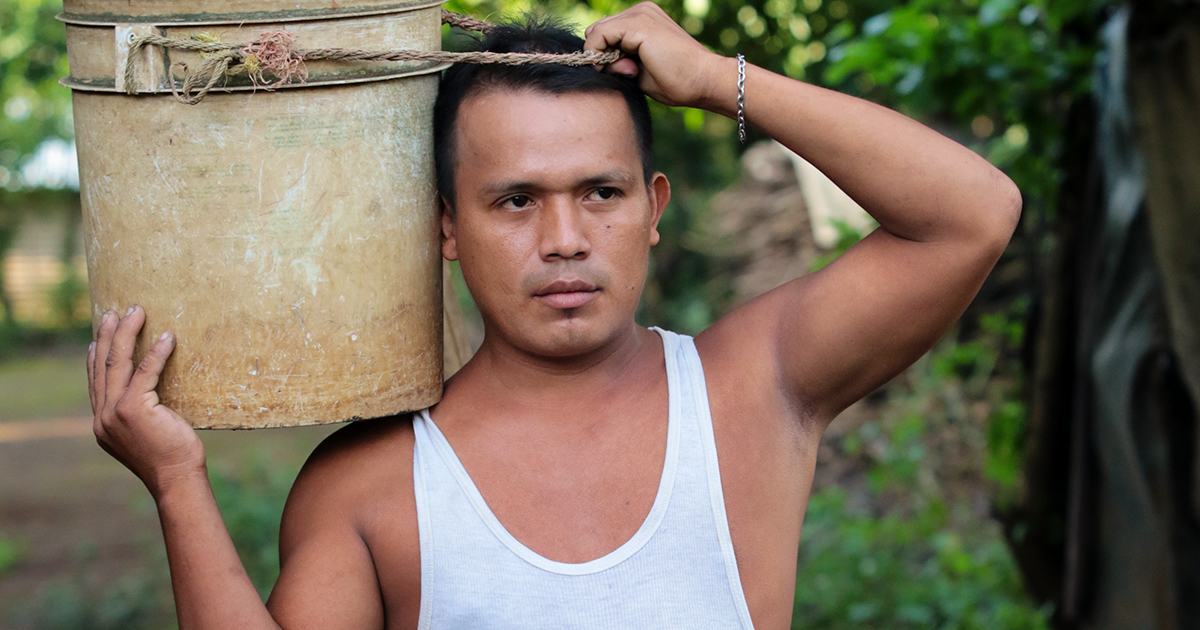 While visiting the village of Pedregal, our staff members encountered a man named Jackson. Every day, Jackson would go to the city of Chinandega to work as a tricycle taxi operator. As he made his way around town, he would see clean water gushing from hoses and open faucets. He would see full water glasses on café tables too. But in the evening, when Jackson returned home, he and his family faced an entirely different reality. Jackson could only provide his household with filthy water from a shallow well, and his children would often miss school because of the waterborne diseases they contracted from drinking it.

Obviously, Jackson was frustrated by the stark contrast between his situation and that of families in the city, and it pained him that his children did not have regular access to clean, safe water.

“We have no other choice,” was all Jackson could say — and tragically, his situation is common in rural Nicaragua. There, in the poorer communities, thousands of households must rely on repugnant water sources just to survive.

Lives at Risk in Nicaragua

In Nicaragua, nearly one-third of the rural population still lives without access to improved water sources. Poor families do not have plumbing in their homes, so they fill their buckets several times a day from murky streams and shallow, hand-dug wells. Visible insects and debris often float in the water, and even if it appears clean, it is densely polluted by pesticide-laden run-off from local farms, as well as animal waste, insects and parasites. A lack of proper sanitation only compounds this issue — rural households often have crude latrines, which leak into one another and further contaminate the water source.

Because of this pollution, the country is considered a high risk for waterborne diseases such as hepatitis A and typhoid fever. Collecting water at open sources also leaves villagers vulnerable to mosquitos, which carry dengue fever, Zika virus and chikungunya. High fevers, stomach pains and kidney problems persist as common issues for many poor families, and diarrheal diseases remain a leading cause of death for children under 5.

Learn more about our other water projects around the world

Making matters worse, few rural families have access to hospitals and medical clinics and may not be able to receive necessary care when they are sick. CIA figures show there is only one physician and one available hospital bed for every 1,000 people, and even if they are able to reach a doctor, they may not be able to afford the prescribed medication. Some sick and hurting people will trudge several miles to the nearest medical outpost, only to turn around and come home empty-handed.

We could attempt to provide the poor with medications and quick-fix solutions, but that would only put a bandage on a much more serious issue. The best way that we can help suffering families is by preventing the life-threatening illnesses that so frequently plague them, addressing the root causes and ending the cycle of repeated disease. Our most surefire plan of action is to provide them with clean, safe water sources.

How Cross Catholic Outreach is Making an Impact in Nicaragua

Cross Catholic Outreach partners with devoted ministries such as Amigos for Christ in order to deliver weary families from gastrointestinal problems and waterborne disease. Together, we are working to address Nicaragua’s water crisis by providing sustainable solutions for poor families.

For too long, families just like Jackson’s have had no choice but to knowingly consume contaminated water, cook with it, bathe with it and accept the consequences of survival. They have been forced to barter their health just to quench their thirst. But with our partners in the field and our compassionate donors, we can provide these families with long-awaited relief. By installing professionally drilled wells and thorough water filtration systems, we can pump safe water directly into poor households with the turn of a tap.

Your gift to end Nicaragua’s water crisis could mean the difference between life and death for those who are constantly battling one bout of illness after another, and it will vastly improve the quality of life for poor families. Students will be healthy enough to attend class and perform their very best. Parents will be free to focus on attending church, raising their children and engaging in income-generating activities.

As many beneficiaries have told us, “Water is life.” It changes everything and is a fundamental necessity for bringing about long-term community transformation. By giving water, you lay the foundation for building a bright future filled with strength and blessing. Please join us in sharing this gift of life with families in need!