Maria Goretti is a saintly example to the Church that holiness is not a matter of age, formal learning or material wealth. Rather, holiness is living a life of total faith in God and living only to do his will in one’s life.

Saint Maria lived her very short life in great material poverty. Her father, who was a farmer, passed away when she only nine. Maria was the third of seven children, with one of her brothers having died in infancy. Like many poor children even today, she was unable to attain a formal education. Maria would spend her days looking after her younger siblings, cooking and cleaning the home, while her family — having eventually lost their own farm — worked the farms of others for little pay.

Eventually Maria and her family settled in Nettuno, Italy, in the Province of Lazio, not far from Rome. There they shared a home with another family, whose 20-year old son, Alessandro, continually attempted to sexually attack Maria. Finally, Alessandro attacked Maria with an awl (or, as some recorded, a dagger), and when she still refused his advances, he stabbed her multiple times.

Maria went through surgery, but only survived for 24 hours after the attack. During that time, she assured her surgeon that she would pray for him; shared with her mother her concern for her and the family’s welfare; and forgave her assailant, Alessandro, with the hope that he would repent.

Alessandro was spared the death penalty and was given 30 years in prison. Three years into his sentence, he began to speak with the local Bishop, Giovanni Blandini, thereby beginning the journey of his repentance and penance that St. Maria had hoped for in the final day of her earthly life. Eventually, Alessandro would testify during the process of Maria’s canonization that she was indeed a holy young woman and a virgin. After being freed from prison, he lived the rest of his life as a brother in the Franciscan Capuchin Order, until his death in 1970 at the age of 87.

Pope Pius XII beatified Maria Goretti on April 27, 1947, with her mother and surviving siblings present. Three years later, on June 24, 1950, Pope Pius canonized Maria Goretti as a saint before one of the largest gatherings in the history of canonizations. Speaking to the crowd of youth present, Pius XII asked them to guard their own chastity, as St. Maria had given her life to save her own.

Of the many miracles attributed to the intercession of St. Maria, three involved her brothers. For example, one brother, Mariano, professed that she miraculously saved his life during World War I, by miraculously communicating to him not to charge over the trenches in a particular battle during which his entire unit was killed.

Related: A Light to the Nations – Reflection on the Solemnity of the Nativity of Saint John the Baptist

Join Our Mission to Alleviate Material and Spiritual Poverty

So often God chooses those who are small in the eyes of the world to be great in the life of the Church and to be examples of faith in Christ, commitment in doing God’s will and exemplars in loving one’s neighbor.

As a Catholic ministry, we seek to protect the dignity of all human life. Through our care for orphans and vulnerable children, and our elderly care programs, you can help uplift those who are small in the eyes of the world. Your donation to Cross Catholic Outreach supports the lifesaving work of our ministry partners serving poor children and families around the globe.

As we work to alleviate material and spiritual poverty, Cross Catholic Outreach invokes the intercession of St. Maria Goretti, a poor young woman who was rich in faith and the love of God.

St. Maria Goretti, pray for us! 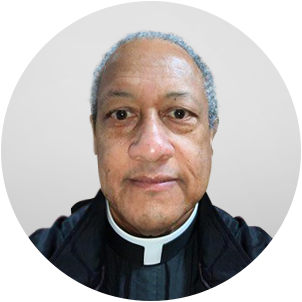 Reverend David Andrew Fisher was born and raised in Columbus, Ohio, and was ordained to the priesthood in May of 1984 by His Holiness, Saint John Paul II, in St. Peter’s Basilica after receiving formation at the North American College in Rome, Italy. He is an Outreach Priest with Cross Catholic Outreach, 4th degree Knights of Columbus, and presently adjunct professor of Eastern Christian Thought at St. Charles Seminary in Philadelphia. Fr. Fisher is a priest of the Eparchy (Diocese) of Our Lady of Lebanon of Los Angeles (Maronite Catholic Church).

Donations from this campaign will be used to cover any expenditures for orphans and vulnerable children incurred through June 30, 2021, the close of our ministry’s fiscal year. In the event that more funds are raised than needed to fully fund the project, the excess funds, if any, will be used to meet the most urgent needs of the ministry.