Rich Lesson Learned from the Poor

It is amazing to witness the incredible generosity of our Catholic brothers and sisters in developing countries. For example, Jim Kline, our Africa Projects Officer, recently returned from Ethiopia with a beautifully-woven basket. A very poor, single mom had given it to him. It was one of the very few things she owned, and she’d made it herself—she wove and sold baskets for a living. Her gift represented an enormous amount of time, as well as food and other necessities the sale of that basket would have meant for her family. But she insisted he have it.

Another poor Ethiopian woman grew cabbage on a small plot of land to sell in the marketplace. She absolutely insisted Jim take no less than four of her cabbages. Again, that gift represented a generous portion of the only source of income she had, but she gave it out of Christ-like love. Both women were able to earn their livelihood because of Cross Catholic’s support of an income-generation program for marginalized women. It was their way of giving back out of their bounty. 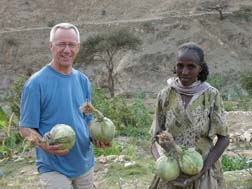 Africa Projects Officer, Jim Kline, accepts the generous gift of four cabbages from an impoverished woman who grows them for income.

When one elderly man in Haiti was asked why he cooked what little food he got from Cross Catholic-sponsored Kobonal Emergency Survival Program and invited his poor neighbors to come and eat, he explained, “The Bible tells us, what I have I’m supposed to share with my brothers and sisters, even if they don’t share with me…When it’s all said and done, it’s not me giving it to them. It’s God giving it to them, because it was God who gave it to me.”

1 John 3:17 tells us that if we have material possessions and see a brother in need but have no pity on him, the love of God is not in us; and James 2:15-17 says if we see a sister without clothes or food and simply give her good wishes but do nothing to actually help her, our faith is dead.  The people Cross Catholic works to serve—the poorest of the poor—have next to nothing; yet they freely and generously give, not only to their needy neighbors, but also to those of us like Jim, who have more material possessions than they will probably ever own. Catholics in prosperous countries such as the U.S. could benefit from their incredible examples of selflessness.